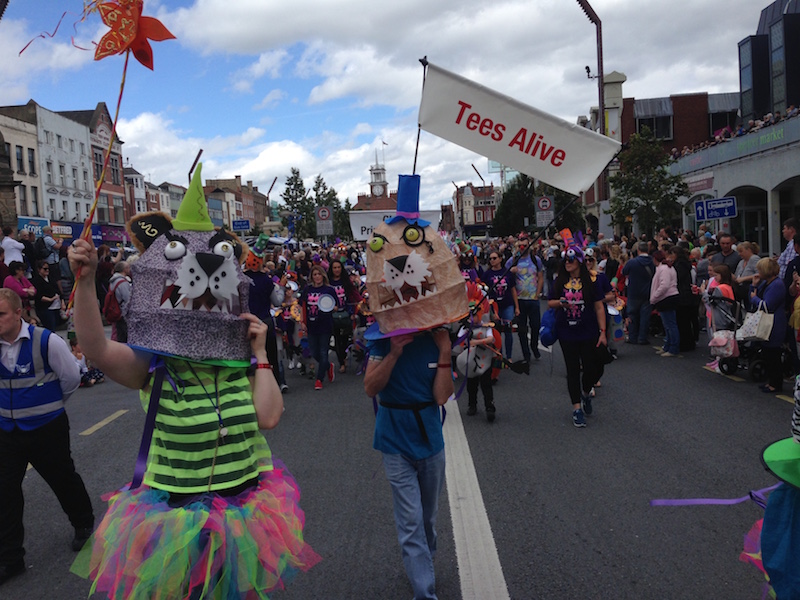 The annual festival is attended by thousands of people and features street theatre, dance and music productions from all around the world. Tees Alive is part of the national social care charity Community Integrated Care.

The Tees Alive Drama Group have performed at the festival’s carnival parade for four years, and this year they were given a theme of ‘Big Headed Growly Animals’. The group was part of a select group of local community groups and schools that were given the honour of taking part in the carnival.

The students prepared for the event over several months, developing new skills and experiences along the way. Their participation began when they met Morwenna Catt, the artist who devised this year’s carnival, who explained to students her vision for them taking part dressed as jungle animals, like snakes and tigers. The students went on to make their own costumes, inspired by Morwenna’s designs.

Students also worked closely with the Urban Kaos dance group, who are based at ARC Stockton – the Stockton Arts Centre. Urban Kaos supported them to create their choreography for the performance – helping them learn both set routines that would be repeated throughout the festival, as well as develop improvisation skills.

Eighteen people from Tees Alive took part in the festival, where they were cheered on by members of the public. They led the Carnival, and built excitement amongst festival goers by getting in character – dancing, chanting and growling to represent their animals. The carnival performance was closed with a large firework display.

Andy Hood, Project Manager at Tees Alive, says: “Our Drama Group at Tees Alive really loved taking part in the event. It built their confidence, helped them learn new drama skills and saw them take centre stage in front of their local community. It was a real honour for our students to be selected, and this really was a highlight of our year.”

He adds, “I’d like to thank the Festival Organisers, Urban Kaos and Morwenna, for all of their support of our students. They’ve given them memories, skills and experiences that will stay with them for a lifetime. We’re looking forward to taking part again in 2016!”

Find out more about Community Integrated Care at www.c-i-c.co.uk

Edinburgh man with autism takes on Silverstone Half Marathon

It’s our right! Enabling people who access support to vote