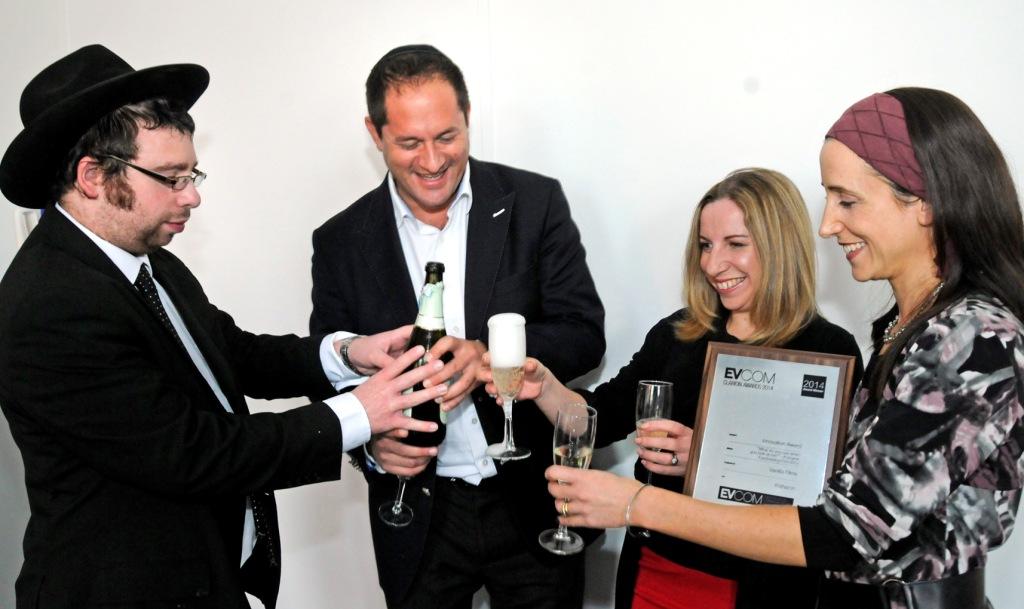 A twelve-minute film which follows the lives of people with learning disabilities who are supported by the charity Kisharon has won an EVCOM Clarion Award for the production company Vanilla Films.  This is the prestigious award ceremony’s 11th year but the first time that they have introduced a new award category for innovation in the field of visual excellence in communicating corporate social responsibility (CSR).

Filming took place at the charity’s Tuffkid Nursery, where children with learning disabilities play alongside their mainstream peers and at Kisharon Day School – the only Jewish school for children with learning difficulties in north-west London.  Kisharon’s adult employment programme is also featured: Chaim Dovid Rotenberg who is supported by the charity changes perceptions when he goes to work at City firm Cardano for the first time.

What caught the judges’ attention was the fast turnaround of guest vox pops filmed at Kisharon’s gala dinner in May [2014] where the film was premièred.  “When you look at me, what do you see?” asks narrator Eliezer Chontow, a Kisharon support worker who has Down’s syndrome.  Guests who were interviewed were asked to define themselves then the answers were edited and shown at the beginning of the main film to provoke audience reaction.  Those featured included British-born Asian television personality Meera Syal, who was guest speaker on the night.

Richard Franklin, Kisharon’s director of fundraising and communications, said: “This is a significant award in the not-for-profit and corporate social responsibility arena.  We chose Vanilla Films for their understanding of our desire to champion and challenge attitudes towards special educational needs, and to address prejudice.  Our trust in their innovative approach has given a powerful voice to the people we support and afforded our audience a glimpse of what it is like to step into the shoes of someone with complex needs. It is fantastic news that our collaboration with Vanilla Films has resulted in this prestigious national accolade – which is a first for Kisharon.”

Debra Sobel, co-MD of Vanilla Films with Karen Benveniste, adds: “The Clarion’s Innovation Award is a new category so we’re thrilled to have been the first to win it.  EVCOM is the leading industry body that recognises visual excellence in corporate social responsibility (CSR) so it is very exciting for everyone involved.  Kisharon came to us because they wanted to do something a bit different, something edgy and innovative.  Filming the opening of the film live on the night achieved just that as guests became part of the film.  Working with Kisharon is inspiring and we are glad the film helped to make an impact.  This is our fourth award in six months so we’re delighted that our work is being recognised.”

Follow this link to see the Kisharon Fundraising Film with vox pops made by Vanilla Films.