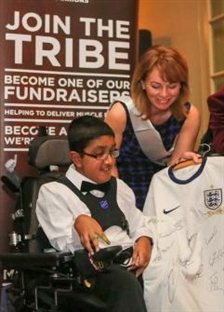 Thanks to specialist Herts-based family charity The Muscle Help Foundation’s ‘Muscle Dreams’ programme, 10-year-old Kai Shah’s lifelong ambition will finally become a reality next month, when he and his family will visit the home of the National Football Centre to watch his heroes, the England team, train at St George’s Park near Burton-on-Trent in the National Forest.

Much to the delight of Kai and his family, England players Ashley Cole, Gary Cahill, Frank Lampard, Jermain Defoe, Kyle Walker and Jack Wilshere were on hand to surprise Kai with the good news at the fundraiser in personal video message, complete with the charity’s signature ‘Muscle Warrior’ salute: a visible symbol of hope, courage and strength for all those with muscular dystrophy.

Watch Kai’s Muscle Dream message from the England team below.

The Muscle Help Foundation delivers highly personalised experiences in the UK known as ‘Muscle Dreams’ for children and young people with muscular dystrophy (MD) and allied neuromuscular conditions. Its CEO, Michael McGrath, was himself diagnosed with MD at the age of 18; Michael is the first and currently only disabled person in the world to have successfully led expeditions to both the North and South Poles.

Michael McGrath said: “We are absolutely thrilled for Kai that he will get the chance to meet his heroes and cheer them at Wembley next month. Having recently spoken with Kai’s father Himish, I know the family’s excitement barometer is off the scale! I would like to personally thank those England players who agreed to participate in the making of Kai’s Muscle Dream announcement film, the England Footballers Foundation and 1966 Entertainment who have been incredibly supportive in helping us make this experience a reality!”

The Muscle Help Foundation was co-founded by Michael McGrath (aka Chief Muscle Warrior), who is the CEO of the charity. www.musclehelp.com

Long read: Disability, pregnancy and me