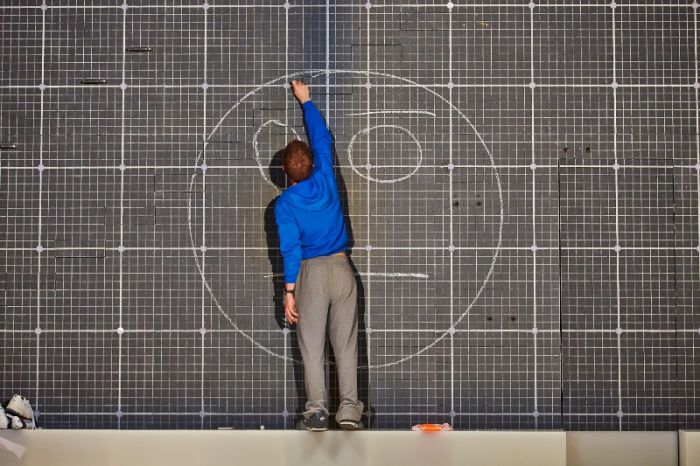 Jude Law is performing live on stage with actors Luke Treadaway and Niamh Cusack as part of A Curious Night at the Theatre, a unique charity gala at the Apollo Theatre on 1 July 2013. Jude joins Luke and Niamh – stars of the Olivier Award-winning National Theatre production of The Curious Incident of the Dog in the Night-Time – in a star-studded mix of theatre, comedy, music and a live auction to raise money for charities Ambitious about Autism and The National Autistic Society.

Produced by Luke Treadaway and director Katy Rudd, A Curious Night at the Theatre features the world premiere of Simon Stephens and Mark Haddon’s especially-written sequel to The Curious Incident of the Dog in the Night-Time.

The story: ‘A typical day for Christopher John Francis Boone is interrupted in the most unlikely way possible.  His regular game of Tetris is invaded by Doctor Who.  He is sent on a mission to do combat with the dreaded Moriarty who is in pursuit of a dreaded Metaphor Virus.  When he needs help he turns to the Queen.  She allows him access to the much sought after brain of Q.  His unlikely supply teacher for the week becomes a reluctant but brilliantly helpful sidekick.’

A Curious Night at the Theatre is hosted by Mel Giedroyc, comedian and co-presenter of The Great British Bake-Off, and also contains stand-up comedy from Simon Amstell.   Music is provided by singer-songwriter and multi-instrumentalist Bat for Lashes, the all female vocal group The Boxettes, pianist Derek Paravicini who is blind, has autism and severe learning difficulties, and is renowned as one of the most extraordinary musical entertainers of his generation, and The James Christy Band.  James Christy was diagnosed with Asperger’s Syndrome when he was six years old and ‘discovered’ at the age of 14 by his music teacher and now performs all over the UK with The James Christy Band.

An on-stage auction, led by auctioneer Ed Rising, will include:

And available online only:

All lots are currently available online on http://www.sellebrity.org.uk/auction-list?page=1

Luke Treadaway said: ‘Katy and I had the idea to produce an autism fundraising event when The Curious Incident of the Dog in the Night-Time first started at the Cottesloe Theatre. During rehearsals I’d met Ambitious about Autism’s Youth Patron Cian Binchy and he really impressed me and helped me understand what it can be like to live with autism.  We want the money we raise to go towards supporting people with autism and I’m so grateful to everyone who is giving their time and talent to put on the best show possible.’

Katy Rudd said: ‘When researching the show, Luke and I were struck by the lack of opportunities there are for young people with autism.  Life after school can be very lonely with little opportunity to mix with other people and to develop skills that the rest of us take for granted.  We want to raise as much money as we can for this great cause with the help of some brilliant musicians, comedians and actors and make it a memorable night.’

Jolanta Lasota, Chief Executive of Ambitious about Autism, said: ‘We were absolutely delighted when Luke Treadaway told us he wanted to organise a theatrical fundraising night for Ambitious about Autism and the National Autistic Society. A Curious Night at the Theatre is a brilliant and very exciting way of raising money and increasing autism awareness. We know that some teenagers with autism struggle as they transition into adulthood, just as Luke’s character Christopher Boone does in The Curious Incident of the Dog in the Night-Time. We will use the funds raised to continue supporting young people with autism so they achieve their potential and live the lives they want.’

Mark Lever, Chief Executive of the National Autistic Society said: ‘We’re thrilled to be working with Luke, Katy and the Curious cast on this wonderful event. Autism is a lifelong and disabling condition, and the money raised will help ensure that more children and adults with autism get the support, information and services they need. A ticket to this unique performance is a passport to an unforgettable night of comedy, drama and curious entertainment, and I hope that people come along and support us.’

There are special VIP packages available at £500 and £250. They both include a pre-show Moet & Chandon champagne reception from 7pm at the Apollo theatre and the £500 package offers the chance to mingle with the cast at the after-party at The Century Soho, Shaftesbury Avenue.  Tickets also available from £25.

A Curious Night at the Theatre will take place on 1 July, 8pm at the Apollo Theatre, 31 Shaftsbury Avenue, London, W1D 7EZ.