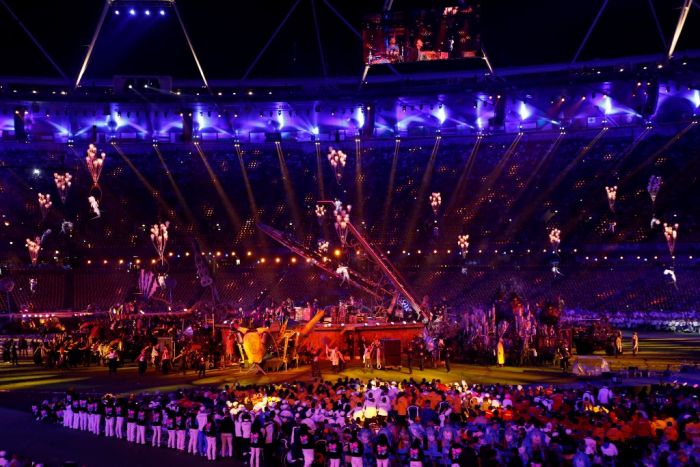 A joyous, spectacular Closing Ceremony brought the curtain down on a Paralympic Games at the Olympic Stadium last night (Sunday), a Games declared “the greatest Paralympic Games ever” by Sir Philip Craven, president of the International Paralympic Committee.

“The Paralympic Games have truly come home and found their pathway to the future here in London,” said Craven as the London 2012 summer finally came to an end.

Britain’s quadruple gold medal-winning Paralympians David Weir and Sarah Storey carried the Union Flag into the arena at the start of the evening in front of 80,000 flag-waving fans as the famous stadium roar received one last airing.

Britain’s Paralympians set out on their London 2012 journey 11 days ago with the aim of beating their Beijing total of 102 medals, and they entered the stadium tonight as proud possessors of 120 medals, including 34 golds, 43 silvers and 43 bronze.

They have performed in front of packed arenas, urged on by passionate and partisan crowds; they have captured the hearts of millions and now, at last, it was their time to party.

Storey, who took her Paralympic gold tally to eleven at her sixth Games, said: “I am so proud to carry the flag for this amazing team who have run, jumped, cycled, swum, and thrown so well over the last two weeks.”

Weir, who clinched his fourth gold in a thrilling sprint finish at the end of today’s Marathon, said that carrying the team’s flag was “the best feeling in the world”.
“To close the Games in this way is such an honour, so special for me,” said Weir, who lit up the Stadium three times winning triple T54 track titles.
“London 2012 has raised the bar, it has raised the level. This has just followed on from the Olympics, so to be put alongside able-bodied athletes, it shows how far we’ve come.”

ParalympicsGB needed special agreement from the International Paralympic Committee to name two flagbearers, and the ceremony celebrations broke normal protocol too, bringing the athletes into the stadium before the start so they could enjoy the entire show.

Wearing navy blue and red Closing Ceremony suits, Britain’s multi-medal winners entered last of the 164 countries which have competed foir some 500 meals over the last week and a half. They took their seats on a green-swathed infield to watch a three-hour musical spectacular called ‘Festival of the Flame’, a tribute to “the gatherings that infuse the spirit of our nation”, and to the spirit of the Games.

A cast of nearly 2000 performed a series of celebrations to the seasons, accompanied by the band Coldplay who ran through many of their hits from a Sundial Stage, including ‘Us against the world’, ‘Yellow’, ‘Clocks’, and ‘Viva la vida’.

The flagbearers formed a giant heart shape that was burned into the ground to the sound of Coldplay’s ‘Life is Technicolor’, a mark of the heart of many nations.

There were crop circles, a parade of fantastical vehicles, aerial ballet, and crows on stilts; there were drummers and acrobats, flame dancers and steel horses; a rising Sun King, a Snow Queen, and 19 fireflies which descended from the stadium roof.

The winter section came to life with a snow storm of confetti, while high-wire motorbike rose across the stadium to ignite a ball of energy symbolising the start of spring. Among the many extraordinary creations was a mechanical grasshopper, a fish and a steamship carrying the singer Rihanna.

IPC president Sir Philip Craven entered the arena on a custom-built car with The Earl of Wessex, patron of the British Paralympic Association.

The British Paraorchestra performed the Paralympic Anthem as the Agitos flag was lowered. The Brazilian flag was raised and the Paralympic flag passed by Craven from London Mayor Boris Johnson to the Mayor of Rio de Janeiro Eduardo Paes.

“Together these last few days we have shared some wonderful days,” said London 2012 chairman Sebastian Coe. “Our minds were opened to what people can do, to what they can achieve by sheer talent and determination.

“The Paralympic Games has set hew records every day, sporting records, records for crowds, for television audiences, for unbridled spirit.

“Paralympians you gave the world feats of speed, endurance, dexterity and skill many did not think possible,” he said.

“You left the world’s media to wax lyrical over your performances and left millions of Paralympic sport fans who created a ‘wall of noise’ in the venues hungry and desperate for more.

“This was an event absolutely no-one wants to end. These Games have changed us all forever.

A huge cheer greeted swimmer Ellie Simmonds and sprinter Jonnie Peacock, two of Britain’s youngest gold medallists, who had the honour of extinguishing the flame in the Paralympic Cauldron to mark the official closing of the Games.

Jay Z joined Rihanna and Coldplay for a rousing performance of ‘Run this Town’.

As a final burst of fireworks filled the night sky, British Paralympians expressed their pride at being part of such an extraordinary Games.

Equestrian Lee Pearson said: “I’m proud of Great Britain and I’m really honoured to have competed at London 2012.
“I’m proud of the helpers, the volunteers, the organisers. I’m proud to be British.”

Pearson’s teammate Natasha Baker, winner of two Equestrian golds at her first Games, said: “The atmosphere has been completely buzzing. It’s so sad but I really don’t want to go home. It’s like being in a bubble.

“Winning two gold medals obviously topped it off but the whole experience has been overwhelming and it’s going to take a lot for Rio to come up to this standard.”

“These have been the best few weeks of my life,” said athlete Sophie Kamlish. “It’s pretty upsetting that it’s over tonight but it’s still really nice to be here.”

“Locog have done a fantastic job right up to the very end of the Games and they’ve done us Paralympians proud. Bring on Rio.”

Cyclist Jody Cundy spoke for Paralympians everywhere when he said: “It’s been an amazing few weeks. It’s just sad to know that it’s coming to an end. It’s put us on the map, pure and simple.”