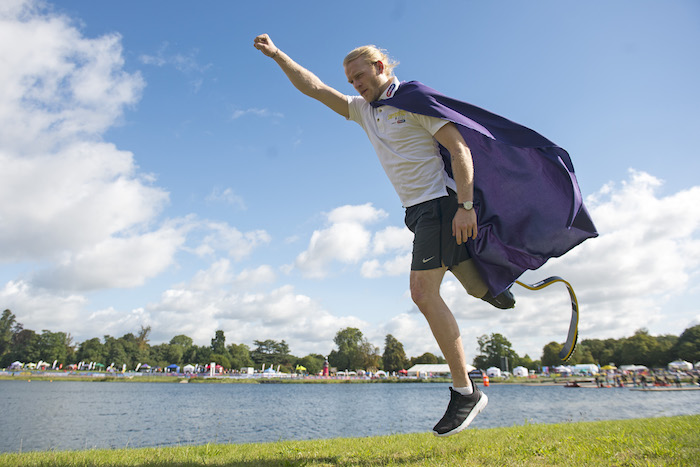 When he swapped his running blade for dancing shoes this autumn, Jonnie Peacock had no idea how much his life was about to change – and now he’s encouraging Brits to try something different too, by taking part in the Winter Wonderwheels event this weekend. We caught up with the athlete earlier this week to find out more

Sport has played a huge part in Jonnie Peacock’s life. It’s won the 24-year-old a clutch of gold medals, include two Paralympic golds, it earned him an MBE, and even won him a spot on this year’s Strictly Come Dancing – and this week, it got him a spot on the shortlist for BBC Sports Personality of the Year.

“It’s such an honour to be among the names that have been nominated before, and this year especially, there are some incredible athletes on that list,” he says. “This has been probably by best year, athletics-wise, ever. There have been some serious athletes come through the last few years, so there have been some seriously competitive events. We put a lot of work in and it’s really nice that that gets recognise. It gives you confidence that you’ve made the right choice. I’ve got an amazing team behind me as well, who’ve managed to put me there – it’s a little bit of recognition for every single person.”

For all the awards and accolades and public support mean the world to Jonnie, he says there’s much more to sport than a career for him. It’s a got a real physiological effect too.

“The biggest impact, before I even made it to the Paralympic stage, has got to be the confidence it gives you,” he says. “Sport is good not just for the body but also for the mind. The hormones that it releases, there are so many positive things. Anyone who’s done sport knows that feeling.”

And it’s because of this that Jonnie’s encouraging Brits to tap into those endorphins this weekend, and to sign up for the Winter Wonderwheels event at Dorney Lake in Windsor. Following the success of the Superhero Tri in the summer, which saw people of all abilities run, cycle and swim, this Sunday, there will be 1km, 5km and 10km challenges on offer – and you decide how you make your way round.

“We’re just trying to get people to realise how great sport can be,” Jonnie explains. “Some people have a bit of a fear that it’s not the right event for them, that it’s not an event they can get involved in. This one is for every single person – there’s no one that it’s not for. Even if they can’t get around on their own, they can bring a friend or family member. They can do it as a team. There’s really no real rules as to how to get around this course. Maybe leave the jet pack at home, but everything else will be fine!”

npower is excited to be partnering with Winter Wonderwheels following the success of the Superhero Tri, powered by npower, last summer. Once again Jonnie Peacock is captain of #teamnpower ­ and will be racing his team to victory on 3 December. Sign up now and save the day! www.superheroseries.co.uk

Check out our full interview with Jonnie in the January/February issue of Enable, out 3 January.