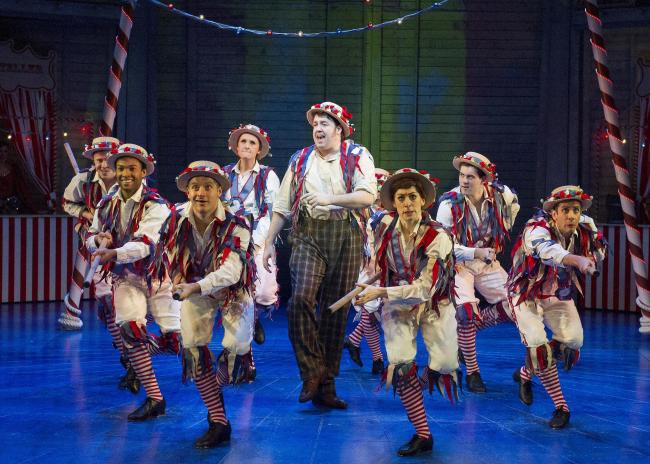 Jason Manford has told fans he was “very proud” to be part of Scotland’s very first major dementia-friendly theatre performance.

In a post to his Facebook page, the British comedian wrote: “Very proud to be part of Scotland’s very first dementia-friendly theatre performance of a major touring production tomorrow.

“800 people from Care homes around Scotland coming to enjoy Chitty Chitty Bang Bang with their families.”

The 8 out of Cats star is currently playing the role of excitable inventor,  Caractacus Potts, in the new touring revival of Jeremy Sams’ Chitty Chitty Bang Bang.

Tonight he and his co-stars will take to the stage to perform tunes such as Truly Scrumptious and Me Ole Bamboo to a crowd of elderly people suffering dementia at Festival Theatre, Edinburgh. 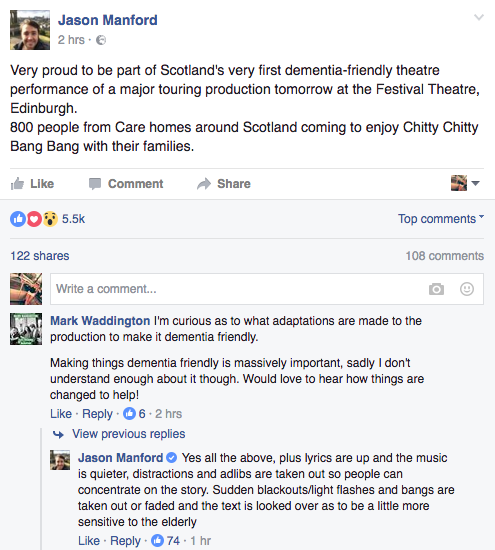 During the show the lighting levels in the auditorium will be brighter and sound levels reduced to make the audience feel as comfortable as possible.

Joining in with the singing will also be encouraged and people we be allowed to come and go out of the auditorium during the performance.

The idea stemmed from West Yorkshire Playhouse who were first to produce a dementia-friendly version of the show for English audiences earlier this year.

Paul Hudson, project coordinator at Festival Theatre, Edinburgh, said when he asked West Yorkshire Playhouse to add a Scottish performance to their tour he only expected to sell around 400 tickets.

“But we have 780 people from all across Scotland coming tonight. The fact that is nearly double what we first predicted show the sheer need for accessible performances.”

Tonight’s audience will include 90 people from as Glasgow carehome as well as a range of individuals who still live independently with dementia and other illnesses.

“It is all about creating access for people,” said Paul. “We want to include options for people who may have stopped coming to the theatre, maybe because they found it stressful.

“But performances like Chitty Chitty Bang Bang can help give them their confidence back and help them re-enage and stay connected with their community. It’s all about the social aspect, and that’s what we want to encourage.”

Get busy in the kitchen for Leonard Cheshire Disability