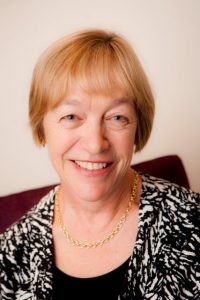 Last January, broadcaster Andrew Marr was one of the unlucky 152,000 people annually to suffer a stroke. The last 12 months have been a turbulent journey for the BBC presenter and his family, particularly his journalist wife of 26 years Jackie Ashley. The Guardian columnist sat down with Enable to give a very honest account of the impact of stroke on loved ones, and reveals why she’s joining the campaign for better support for carers.

Every five minutes, someone in the UK has a stroke. The effects are often immediate, and the impact can be devastating.

Behind every stroke patient is a family. People who are just as shattered by the impact of the blood supply being cut off to their loved one’s brain – and people who, very often, step into a caring role without thinking twice.

Guardian columnist Jackie Ashley knows what it’s like to be one of those people. In January, she suddenly found herself catapulted into the role of carer when
her husband, television journalist Andrew Marr, collapsed at the hands of a stroke. He was fit, healthy and 53 years old.

“It was a complete shock,” Jackie says. “I didn’t know much about stroke. I knew quite a bit about other things – my elderly father had had Parkinson’s disease and my mother had had heart failure, but I’d not come across anyone who’d had a stroke. It was the last thing we expected for someone of Andrew’s age and fitness.”

And so began what Jackie sums up as “the most traumatic year” of the family’s lives. Initially, the couple got support from carers coming into their home, but the lack of flexibility was difficult for Andrew, who was paralysed down one side, to handle. Quite quickly, Jackie decided to take six months off to care for her husband.

“It took a while for it to dawn on me that that’s what I was doing – caring,” she admits. “You never think, ‘Oh, I’m a carer now.’ You have to accept what you’ve got and get on with it. It’s the same for Andrew. We could spend our lives crying about it, or we could say, ‘Let’s make the best of where we are now.’”

Jackie’s transition from busy journalist to carer didn’t come easily – and she’s quick to dismiss any notion that she’s some sort of angelic Florence Nightingale figure. “You’re just there with your loved one in the hospital,” she says quickly. “People say, ‘You’re wonderful doing what you do.’ Well, what else am I meant to do?”

It was Andrew’s arrival home which compounded how difficult the weeks and months that were to follow would be. “Apart from the first few weeks where we just didn’t know if he was going to pull through, that was the most difficult thing,” Jackie confesses. “He went off to hospital one person, and came back another one completely. We hadn’t really taken on board how much the house was going to have to be changed, how much our routines were going to have to change.

“Although we did have some help from the very kind occupational therapists and physiotherapists prior to his discharge, we really found that we’d have to manage most of it ourselves. At first, you think, ‘How will we ever manage this?’ But you do. It’s a different kind of way of living. After stroke, everything is done at a slightly slower pace, but you can still get a lot of pleasure out of life.”

At first, Jackie thought she knew quite a bit about disability. It’s a topic she’s covered at length in her own work, and her late father Jack Ashley, Baron Ashley of Stoke, was a politician and disability campaigner who was deaf his whole life. She hadn’t, however, cared for someone full-time before. Jackie is working with Carers UK, the nationwide charity championing the rights of carers, to try get more help for the country’s 6.5 million unpaid carers.

“I think carers definitely don’t get enough support,” she says. “It can be very draining. The first few months, I was totally exhausted all the time. I started to get ill, I had coughs and colds and was constantly feeling run down. As we have an ageing population, more and more people are having to take periods of time to care for elderly relatives. Someone might take six months off to care for someone, but they might find that they don’t have a job at the end of it. I think that the idea of carer’s leave, where you’re allowed to take up to a year off, maybe a little longer, to look after a relative, is fantastic. That would give you time to adjust, and to decide what is going to happen.”

For a couple who used to operate at 100 miles per hour, life passes at a more leisurely pace now – and Andrew is still doing hours of intense physiotherapy weekly. He needs less support every day, now walks with the aid of a stick, and went back to work on the Andrew Marr Show in September. Jackie does still have to help him get up in the morning, and they’re hopeful that things can improve further still. A walk in the park is cherished now – a far cry for jam-packed diaries and plans for the next big job.

So, aside from slowing down, what has Jackie Ashley, journalist, carer and definitely not Florence Nightingale, learned from the last year?

“I’ve gained an awareness of how difficult life is for people with disabilities,” she says straight away. “I was aware, to an extent, of how hard life can be. Andrew is very much still trying to get out and about, get on the train, get on the bus, go to theatres, and you do realise how very hard it is despite all the so-called disability access everywhere.

“This year has taught me how kind many people can be, how resilient the human spirit can be and how much more needs to be done to sort out help and support for both carers and people
with disabilities. A lot of people are living longer but often with conditions which require care and help. We’ve got to change the way we organise society.”

Carers receive helping hand to aid loved ones in an emergency