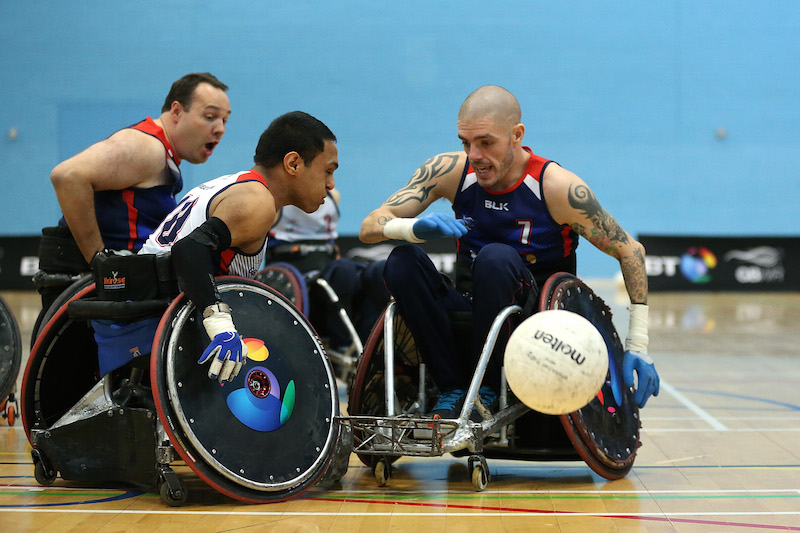 The final countdown to the BT World Wheelchair Rugby Challenge kicked off today with the announcement of live broadcasting by ITV. The announcement coincides with the 100 days to go milestone to the opening match.

The international tournament is to be held at the iconic 6,000-seated Copper Box Arena, Queen Elizabeth Olympic Park and forms part of the Rugby World Cup Festival.

As part of the arrangement, ITV4 will show live evening matches of the hard-hitting sport. ITV4’s comprehensive coverage will include five hours of live broadcasting each day, brought by a team with a wealth of sporting and broadcasting talent and experience including Presenter Martin Bayfield, the former England and British Lions player, alongside Steve Brown, captain of the GB London 2012 Olympic Wheelchair Rugby team, former England and British Lions player, Ugo Monye, reporter Rachael Latham with commentary team Simon Ward and Mike Spence.

David Pond, Chief Executive of Great Britain Wheelchair rugby, said: ‘GBWR is really excited that ITV will broadcast BT WWRC15. The tournament will feature the world’s best wheelchair rugby teams and run alongside the Rugby World Cup. ITV’s commitment to viewer experience and its ability to reach out and inspire new audiences will be great for the game and will build on the huge public interest following the success of London 2012’

ITV’s Director of Sport, Niall Sloane, said: ‘We’re excited to be the broadcaster of this important new tournament which presents a fantastic opportunity to engage the public in a tremendous sport at the top level and entertain with first class live action.  As the UK broadcaster of the Rugby World Cup, ITV is delighted to be able to offer viewers the perfect complement to that event and showcase the appeal of this fantastic form of rugby.’

Suzy Goodman, Head of Brand Partnerships, BT Group Marketing and Brand, said: ‘BT has a long history of supporting disability sport and we’re proud to be helping Wheelchair Rugby to grow and engage new audiences. The BT World Wheelchair Rugby Challenge will be thrilling. It’s a fantastic opportunity for the GB squad to test themselves against some of the best teams in the world, and I urge people to buy tickets and get behind the team this October.’