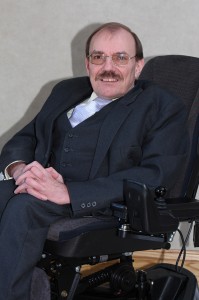 His incredible career has spanned eight decades, 14 Prime Ministers and innumerable changes in legislation, policy and attitudes. Disability rights campaigner Sir Bert Massie takes a step back in time with Enable to discuss disability from the 1950s to the present day…

Sir Bert Massie is the sort of man who really makes you take stock of your life. While you might think you did quite well by helping an old lady across the road once, he can blow that out of the water by reeling off the many changes to UK legislation that he’s played a part in.

When asked which he’s most proud of, he pauses. “The anti-discrimination legislation – although a lot of people worked together on that,” he says thoughtfully. “I worked very closely with William Hague on the 1995 DDA [Disability Discrimination Act]. When I was Chief Executive of RADAR we did quite a lot. We were involved in building regulations which started improving building accessibility back in the eighties. A lot of work on transport – we helped with accessible taxis, trains, dropped pavements… I think the effects are still being seen.”

And that was just the beginning. Born in Liverpool in 1949, Herbert William Massie has been working tirelessly since his teens to make a difference to the lives of Britain’s disabled people. After contracting polio at just three months old, he spent the first five years of his life in hospital before being sent to a boarding school, emerging with no qualifications. From his own experience, and through campaigning, he’s witnessed many changes for Britain’s disabled people.

“[In the fifties], there weren’t the same facilities for disabled people for a start,” he explains. “I was in hospital for five years, which would never happen today – these days, if you’re in for five hours it’s seen as bed-blocking! After that I was sent to a special boarding school for disabled kids. Children who went to special schools were seen as factory fodder. There was no emphasis on academic achievement in any sense at all. People can criticise the provision for the disabled back then, but these schools were expensive. There was no question of resources being limited. Today everything’s about money, not about quality of life.”

When he left school, Bert took it upon himself to get private tuition to gain qualifications. It was far more complicated than it would be today, with none of Liverpool’s night schools offering wheelchair access. Bert had to move to Coventry to sit his exams, which eventually led him to a degree and then a postgraduate qualification in social work. “The fact I could get those qualifications later does suggest that, with the right education, it might be possible to achieve at a more conventional time scale,” he points out. “But it was something I had to opt to do myself. From that school, I know of two other people who were able to get degrees.”

With this sort of determination, it’s hardly surprising that Bert went on to become one of the country’s most active campaigners for disability rights. What was it that inspired him to speak up and make a difference?

“It started when I was 16 and I was given an invalid car, the little blue ones,” he explains. “You’d drive it along and the door would fall off – mid-60s air conditioning! It only had one seat, and I was 16 so what did I want to do? Take my girlfriend out of course! So I joined the Disabled Drivers Association and I was a very junior part of a campaign.”

From here, Bert went on to work with disability rights charity RADAR, where he later became chief executive. He’s also the former chairman of the Disability Rights Commission, and acted as transitional commissioner when it changed to the Equality and Human Rights Commission in 2007, the same year he gained his knighthood. However, for all the changes he’s seen over the years, the diligent campaigner says there is still much to be done across areas such as discrimination and hate crime.

“Services are better today than they were fifty years ago, and so they should be. But we can take that for granted. This government, and any government, is perfectly capable of undoing what’s been done. If we don’t have young people fighting the battles, we’re just going to lose more and more ground,” he says firmly. “Disability organisations don’t have the wealth they used to have. It’s a tough world out there. Every recession we’ve had – and I think I’ve lived through about four of them – has always come to an end. We shouldn’t plan our future on how dire it is today. We should live it based on how great it might be tomorrow.”