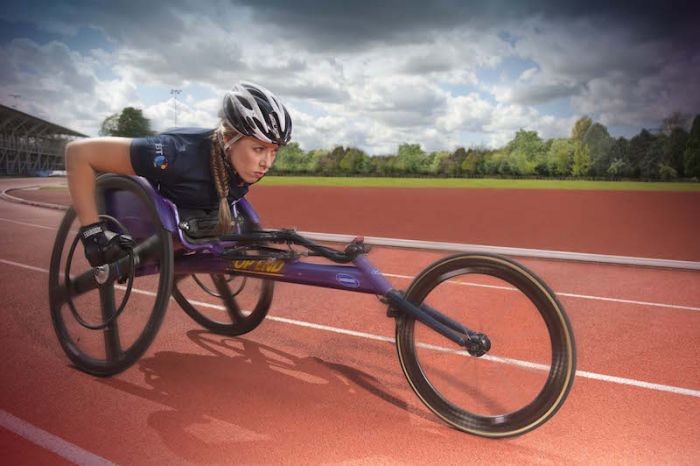 She likes Beyoncé and McFly and devours strawberry laces. She has lucky pants and paints her nails to match her outfit. In fact, Hannah Cockroft is just like most other 23-year-old girls. Except that her favourite songs are what gears her up before breaking world records and strawberry laces are her rocket fuel. And unlike most 23-year-olds, her lucky pants aren’t to get her through her driving test, but a 100m, 400m, 800m Olympic race. And her outfit of choice? None other than the official Olympic gear designed Stella McCartney.

“I’m not sure about the oranges shoes though,” she laughs as we chat about the very special kit she’ll be wearing in Rio. “But I love the design, it’s very unique, very British. I’ll be proud to wear it.”

She still has few more weeks to go until she can rock up to Rio’s Olympic stadium with the estimated 260 other British Paralympian in her new orange shoes. Hannah was one of the first to be announced on ParalympicsGB team, which comes as no surprise when you look at her track record.

‘Hurricane Hannah’ is a double Paralympic gold medallist and champion wheelchair racer who holds the Paralympic and world records for both the 100 metres T34 and 200m T34. She has her a golden postbox in her hometown of Halifax. Oh and did we mention she is also a Strictly champion? In 2014 Hannah won the Sport Relief edition of Strictly Come Dancing with dancer Pasha Kovalev. Maybe not such a normal 23-year-old after all.

I think my birthday has come a month early! 😍 #69DaysToRio Proud to be part of your team @ParalympicsGB! pic.twitter.com/nPt3cvjmLh

Born with cerebral palsy, when she was less than a week old Hannah suffered two heart attacks. The brain damage they caused left her with nerve damage to her spine, legs and feet, mobility problems and issues with her fine motor skills. Doctors said she would never walk, and that she wouldn’t make it past her teens. This month she turns 24 and she has no plans to stop proving people wrong.

“If you’re not there to win gold then why be there?” says Hannah of the upcoming Games. And she is right to be confident – last year she lost just one race. She was beaten by 14-year-old Kare Adenegan in September, her first defeat in seven years and over 300 races.

Hannah however, isn’t worried about the young competition in Rio – winning is the only thing that’s on her mind. “I’m now one of the oldest girls competing, which is ridiculous,” she says. “And there is a lot of pressure. But I’m still confident and I don’t want to be beaten.”

She says it gives her a kick to think that the girls who looked up to her four years ago are now the ones she is competing with. “It’s weird that the majority of girls saw me and then started believing in themselves,” says Hannah. “It’s crazy to think that I might have got them off to a start.”

Despite her excitement for Rio, London will always hold a very special place in her heart. She is looking forward to returning to the stadium where she struck gold later this month to compete in Müller Anniversary Games. “Returning to the Olympic Park is like going home,” says Hannah. “When I was there, it was a completely life changing experience, it was a life making experience – it was just so surreal, the whole Paralympics. I love going back to the stadium, it’s amazing you look out the window and there is place that I call home. When you get that close to the stadium you just… you look around and you think, ‘I lived there for a month of my life.’ And there are just so many nice memories around and I love it. I love going back.”

She admits that Rio will pose a new set of challenges. Unlike domestic competitions, which she finds “fun” and “exciting”, she predicts that on the starting line at Rio she’ll be a bag of nerves. “I’m going to be incredibly nervous so I’m trying not to think about it right now,” she laughs.

For London 2012, things were slightly more straightforward thanks to competing on home turf. Heading to South America, however, brings a few extra hurdles. “In London my dad drove me down and dropped me off but this time I’m going to be tackling the long haul flight, acclimatising and getting out there and just dealing with something completely different to what I’ve ever done before.”

She says lots of her worries have been alleviated thanks to a trip to Brazil earlier this year. She tells me about how when she was training by the beach, locals would try and race alongside her. “I had people cheering and they had Paralympic pictures,” says Hannah. “They knew what the racing wheelchair was, they knew who I was. I think that is so positive because had you put me in the middle of London prior to the London Paralympics, no one would know what I was doing, what the race chair was, who I was.

“It shows that they are ready for us and they are excited that we are coming,” says Hannah. She adds that concerns about things like ticket sales are largely misplaced. “The worries were there for London as well – we didn’t know if we would have a full stadium or a half stadium.

Hannah ends by telling me how London changed the world for Paralympians. “London was the best thing ever for us and I think it is important that that is remembered and celebrated,” she says. “It is really, really important for us to keep pushing it.”

Pushing boundaries? Just add it to the list of things that Hannah excels at.

For tickets to the Müller Anniversary Games, visit britishathletics.org.uk