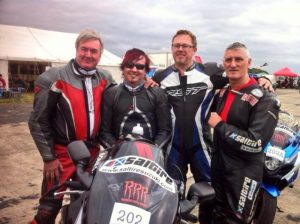 One of Scotland’s finest footballers and the world’s fastest blind and disabled biker will open Naidex Scotland on 18 September at the SECC in Glasgow. Tom Boyd, ex-Celtic and Scotland player and Stuart Gunn, record-breaking speed biker, will officially open Scotland’s premier disability, homecare and rehabilitation event at 10.00am on 18 September.

Glaswegian Tom Boyd MBE is a retired footballer who played 72 times for Scotland. Tom has previously attended and spoke at a members meeting at the Celtic Disabled Supporters Association (CDSA), and recently became a Patron of the CDSA. He now helps publicise the work that they do.

Stuart Gunn recently clocked an electric 167mph in August. Gunn, from Edinburgh, lost his sight following complications after a road crash 11 years ago that also left him paralysed down his right side. Gunn’s father, Geoff, used an intercom system to help direct his son while riding alongside him during the record-breaking feat.

He said: “I’m just delighted and rather honoured to be asked! Out of the many amazing people in Scotland with disabilities, I got the call – it’s a really special feeling.”

Organised by i2i Events Group, Naidex Scotland 2013 (which takes place every other year and is sister event to Naidex National) is the only independent living show for Scotland and the north of England. The event, including the CPD accredited conference and exhibition space showcasing the latest products, is free to attend and welcomes anyone looking for the latest products, services and strategies to support independent living.

With over 2,600 visitors expected at Naidex Scotland this year, registration is open for the free conference and exhibition at scotland.naidex.co.uk.

Naidex Scotland takes place at SECC Glasgow from 18 to 19 September 2013, with over 120 exhibitors and over 2,500 visitors expected. It is Scotland’s premier disability, homecare and rehabilitation event aimed at those working in social and health care and for people seeking the latest assisted living devices. The exhibition showcases the industry’s latest products and services to support care in the health service, at home and in care homes. A conference programme of free seminars also offers FREE learning and the latest thinking from leading specialists.

The importance of disability exhibitions for independence in 2020

The World Down Syndrome Congress is coming to Glasgow