Outside the film industry bubble the question on everyone’s lips is: why are so many non-disabled actors playing disabled parts? Angel Giuffria may not yet be a household name, but the congenital amputee is changing the way we see prosthetics and disability 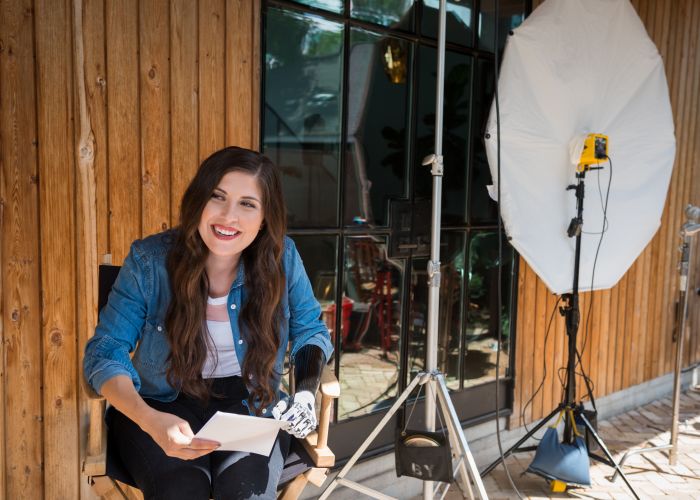 “As far as I know, I am the youngest person in the world to wear a myoelectric prosthetic – I was only six weeks old. At four months and ten days old, I was trained to use it by having little race cars hooked up to the electrodes. When I flexed the right muscle, it taught me how to use the arm as a baby,” recalls Angel. Training a newborn without words is no easy task, but for Angel it was just another part of her childhood. Trailblazing the use of prosthetics has been common practice for Angel, so it’s no wonder she refers to herself as a bionic actress – or even a cyborg in some circles.

Angel is certainly one to keep an eye on due to the refreshing – and at times comedic – way she utilises her prosthetic. Angel’s bebionic is modular so she can choose the aesthetic cover that is right for her on any given day. A customised silver and chrome hand alongside the standard white effect, and several frames allow Angel to change her prosthetic to match her outfit or mood. She has a special flashing prosthetic for appearances, and her Halloween costumes are out of this world. She certainly puts her own touch on how she wears her prosthetic.

As the second person in the world to use Ottobock’s innovative bebionic prosthetic, Angel finally found an arm that works for her.

“For me, I’ve always loved standing out. Blending in was never an option for me, it was never something I wanted to do. Prosthetics, a lot of the time, have fleshy colours and are meant to look like someone else’s hand. But, for me, I’ve never had a hand so what hand am I making it look like?” laughs Angel.

Rose gold, a black and white storm trooper arm with blue LED’s, a clear arm that details the internal programming of her prosthetic to a black and red cover – which Angel details reminds her of a Sith in Star Wars – her star already shines differently from others.

Hey y'all, check out my cool new silver #bebionic hand doing a cool thing. Back in LA for 24hrs for a SICK acting opportunity. Will try not to fidget spin through my audition. 🎥: @morganmiller #ottobock #bionicactress #amputee #actress #fidgetspinner

“A lot of the time people ask me what are the lights for? I tell them it’s for fun: whatever I can do to make this feel more like mine. I remember when I first got [the bebionic], I was the second person ever to have one, and it felt like my hand because I hadn’t seen anyone else with it. Then slowly more and more, people understood: a two-handed person’s hands are unique to them and I wanted my entire arm to be unique to me.”

Working in the creative industry has always been difficult, especially when you’re trying to make it. Being an actor with a disability can cause struggles, but Angel is stripping away the stereotypes and the preconceptions of disability by showing that having a disability shouldn’t, and won’t stop her from making it big.

Having already featured in successful films including a role in 2016’s The Accountant with Ben Affleck, and even as a District 8 amputee in one of The Hunger Games films – Angel knows how to rock it on screen. But it was Genetic Lottery that was Angel’s biggest moment.

The film was part of The 48 Hour Film Project, and Angel won the award for best actress for her lead role as amputee Bailey Harrison. The seven-minute short follows Bailey as she is selected to trial a revolutionary cure-all drug; despite being content and comfortable with who she is.

Angel says: “It was a really big moment. The first time I got affirmation for my acting outside of: here’s a part about a girl with one hand.” Winning the award affirmed Angel’s work as an actress but more importantly, her genuine and honest approach to her prosthetic.

“I used to hide my arm. I used to wear a cosmetic device and I would wear it when I was auditioning because I thought people needed to meet and like me first. Then, they’ll find out I have one arm but they’ll still keep me. The amount of times I fell on my face with that one… I never booked anything when I was hiding it,” explains Angel. Outside of her acting, the youngest person in the world to ever wear a myoelectric prosthetic is finally being her true self.

Tonight my first big commercial (that I'm allowed to talk about) aired during the #SuperBowl and you can catch a glimpse of me doing some bionic archery. I'm so happy a person with differences was able to be showcased within such a huge event. Hopefully this is just a start and also, as of tomorrow, I'm driving out to Los Angeles to live there the next few months. Nervous but excited to try something new! ALSO I need to give a shoutout to my amazing agent @kmrgail who heads the diversity dept. at @kmrtalent Talent Agency & fights so hard for disability inclusion in the media. Thank you Gail💞! #amputee #bionic #bionicactress #bebionic

Everyone at school has been teased or bullied especially the kids that look different, and Angel was no exception. Now, depiction and acceptance of disability is slowly progressing amongst the youth – as Angel experienced during a talk at her old school.

“In our generation and the upcoming generation, we’re embracing differences so much more. There is a lot of stigma attached to the hook army veterans used to wear and the pylon leg amputees had – people see it and just assume that you aren’t capable. Honestly, maybe that does have something to do with the technology: the devices weren’t there yet to help the person to be as capable as they could be” notes Angel.

Despite the ever-growing push for accessibility and recognition that everyone is born different, there is one area, that needs a makeover. “We do have a lot of disability shown in our media but it is not by actual disabled people,” says Angel. “If you look at our commercials, TV shows and films most of the time it is someone pretending and that, as an actor with a disability and an education, is really frustrating. I wonder if they even tried to see someone with a limb difference, or cerebral palsy, or any other disability…

“You don’t get to pretend to be other minorities, but for some reason disability is still a minority that we’re dressing up as. That is exactly what it is; you’re playing dress up. Sometimes it is hard to watch.”

In Hollywood’s history 59 non-disabled actors have won an Oscar for portraying disabled characters* – there is still a problem on the big screen portraying disability. There is no doubt that this attitude needs to change and Angel is on the forefront of making it happen. She is set to appear in season two of Amazon’s Goliath, alongside Billy Bob Thornton, and the streaming site has taken steps for inclusivity.

“This is the first production, that I know of, that has cast so many amputees. I know eight amputee actors with principle speaking parts, so I’m really excited to see how they put it together. There is always that fear of are they going to make people feel bad for us, are we going to be victims? It’s all in the editing,” Angel adds.

Time will tell if Goliath represents disability not as weakness but as strength. There will come a time where disabled actors won’t worry about hiding an impairment but embrace their differences, and push Hollywood to do the same. Angel is already leading the way.

INTERVIEW: Inclusion on the screen with the cast of S.A.M

Riding the rails to your new career

1 Comment on "Inside Hollywood: Introducing the Bionic Actress Angel Giuffria"