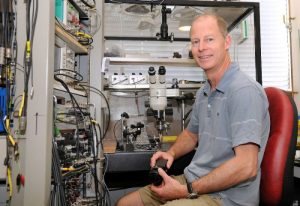 Neurobiologists from the University of Leicester have shown that insect limbs can move without muscles – a finding that may provide engineers with new ways to improve the control of robotic and prosthetic limbs.

Their work helps to explain how insects control their movements using a close interplay of neuronal control and ‘clever biomechanical tricks,’ says lead researcher Dr Tom Matheson, a Reader in Neurobiology at the University of Leicester.

In a study published yesterday in the journal Current Biology, the researchers show that the structure of some insect leg joints causes the legs to move even in the absence of muscles. So-called ‘passive joint forces’ serve to return the limb back towards a preferred resting position.

The passive movements differ in limbs that have different behavioural roles and different musculature, suggesting that the joint structures are specifically adapted to complement muscle forces. The researchers propose a motor control scheme for insect limb joints in which not all movements are driven by muscles.

The study was funded by the Biotechnology and Biological Sciences Research Council (BBSRC), The Royal Society, and the Heinrich Hertz-Foundation of the German State of North Rhine-Westphalia.

Dr Matheson, of the Department of Biology, said:

“It is well known that some animals store energy in elastic muscle tendons and other structures. Such energy storage permits forces to be applied explosively to generate movements that are much more rapid than those which may be generated by muscle contractions alone. This is, for example, crucial when grasshoppers or fleas jump.

“This University of Leicester study provides a new insight into the ways that energy storage mechanisms can operate in a much wider range of movements.

“Our work set out to identify how the biomechanical properties of the limbs of a range of insects influence relatively slow movements such as those that occur during walking, scratching or climbing. The surprising result was that although some movements are influenced by properties of the muscles and tendons, other movements are generated by forces that arise from within the joints themselves.

“Even when we removed all of the muscles and associated tissues from a particular joint at the ‘knee’ of a locust, the lower part of the limb (the tibia) still moved back towards a midpoint from extended angles.”

Dr Matheson said that it was known from previous studies that some movements can be generated by spring-like properties of limbs, but the team was surprised to find passive forces that contribute to almost all movements made by the limbs that were studied – not just the highly specialised rapid movements needed to propel powerful jumps and kicks.

“We expected the forces to be generated within the muscles of the leg, but found that some continued to occur even when we detached both muscles – the extensor and the flexor tibiae – from the tibia.

“In the locust hind leg, which is specialised for jumping and kicking, the extensor muscle is much larger and stronger than the antagonist flexor muscle. This enables the animal to generate powerful kicks and jumps propelled by extensions of the tibia that are driven by contractions of the extensor muscle. When locusts prepare to jump, large amounts of energy generated by the extensor muscle are stored in the muscle’s tendon and in the hard exoskeleton of the leg.

“Surprisingly, we noticed that when the muscles were removed, the tibia naturally flexed back towards a midpoint, and we hypothesised that these passive return movements might be counterbalancing the strong extensor muscle.”

Jan M. Ache, a Masters student from the University of Cologne who worked in Matheson’s lab and is the first author on the paper, continues: “To test this idea we looked at the literature and examined other legs where the extensor and flexor muscles are more closely balanced in size or strength, or where the flexor is stronger than the extensor.

“This could be very important for the generation of movements in insects because the passive forces enable a transfer of energy from the stronger to the weaker muscle.”

This work helps to explain how insects control their movements using a close interplay of neuronal control and clever biomechanical tricks. Using balanced passive forces may provide engineers with new ways to improve the control of robotic and prosthetic limbs, say the researchers.

Dr Matheson concluded: “We hope that our work on locusts and grasshoppers will spur a new understanding of how limbs work and can be controlled, by not just insects, but by other animals, people, and even by robots.”

The Biotechnology and Biological Sciences Research Council (BBSRC) invests in world-class bioscience research and training on behalf of the UK public. Our aim is to further scientific knowledge, to promote economic growth, wealth and job creation and to improve quality of life in the UK and beyond. For more information about BBSRC, check out www.bbsrc.ac.uk