A new voting passport has been created for the upcoming General Election (8 June) to help polling stations become more accessible for people with autism and learning disabilities. 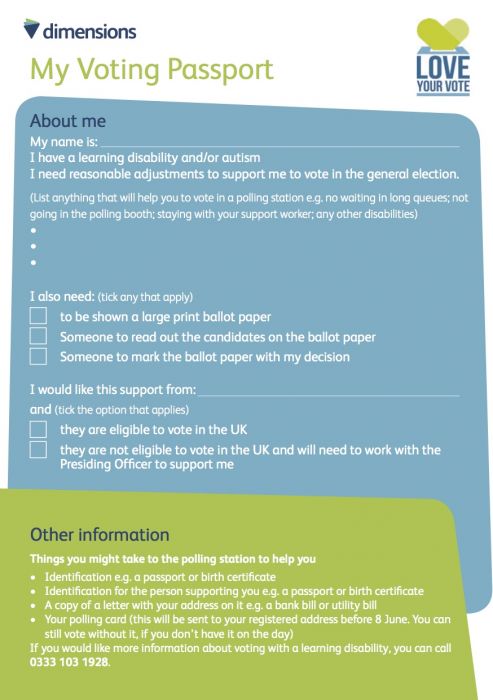 Voting passport as launched by Dimensions

The national social care provider, Dimensions created the innovative document, which is an A4 sheet of paper printed with easy read information on an individual’s voting needs.

Designed to be handed to polling staff on voting day, the voting passport will allow polling staff to understand the reasonable adjustments needed to make voting more comfortable.

The document was created after members of the Dimensions Council and those they support, indicated that polling stations can be a difficult environment for people with autism and/or learning disabilities to cast their vote.

Speaking on BBC Ouch a member of the Dimensions Council, Jordan, who has mild learning difficulties and cerebral palsy, revealed the issues he faced when he first went to vote over ten years ago.

Jordan was turned away from his polling station for having a family member supporting him to read the candidates’ names and provide information within the polling station and booth.

The Presiding Officer told Jordan his family member wasn’t allowed to come in and caused such a scene that Jordan’s anxiety levels grew to a level where the only option was for him to leave. As a result, he never got to cast his vote in the 2005 general election.

Thanks to the new voting passport it is hoped it will tackle similar issues head on. Including an About Me section with the person’s name and other handy guides there is a list of things highlighted to make voting easier – from avoiding long queues to staying with support workers.

It also allows a person to write who they would like support from, their name and if they are eligible to vote in the UK or, if not, that they will need to work with the Presiding Officer to support them.

On the back of the document is a section dedicated to your rights when voting including extracts from the Mental Capacity Act (2005), Electoral Administration Act (2006) and Equality Act (2010) to debunk common myths about people with learning disabilities and autism and their right to vote.

The voting passport also details what those supporting a voter can do including explain ballot options, accompanying an individual into the polling booth all the way to what can’t be done. This is to ensure everyone understands what is acceptable and there is no risk of tampered votes.

Forming a wider campaign by Dimensions called Love Your Vote it is in place to help people with learning disabilities and autism to become more politically engaged.

The General Election will take place on Thursday 8 June 2017 and you can download a voting passport today.

#CripTheVoteUK: Put disability issues at the heart of the General Election

European Elections: everything you need to know