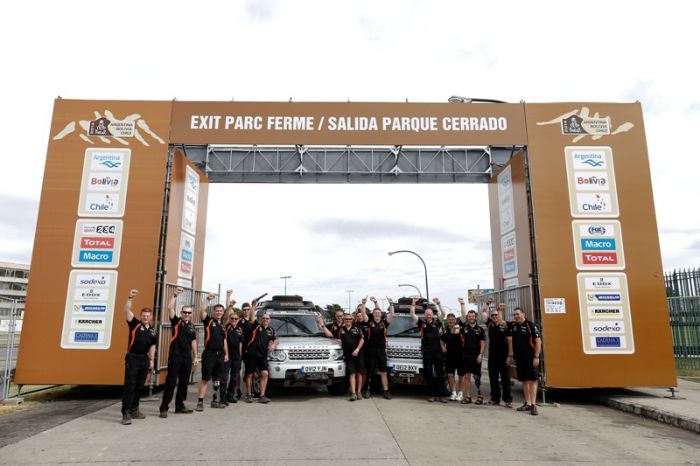 Race2Recovery, the group of severely injured soldiers who made history as the first disabled rally team to enter, and complete, the Dakar rally in 2013 has arrived in South America for the 2014 running of the toughest race in the world.  The team, supported by Land Rover, has entered two race vehicles into the 2014 Dakar which will once again put its competitors through the ultimate physical and mental test.

Race2Recovery operates to the motto ‘beyond injury, achieving the extraordinary’.  So far, the team has raised over £250,000 for Tedworth House Personnel Recovery Centre and Help for Heroes and, this year, is also raising awareness of military charity Blesma. This year’s Race2Recovery team is made up of 16 injured soldiers and civilian volunteers, including drivers, co-drivers, support vehicle drivers and a crew of technical and mechanical experts.

The injured servicemen will be driving Land Rover Defender-based Wildcat rally-raid vehicles, both of which were entered in last year’s race, as well as a T4 race truck and a T5 support truck, which will follow the route providing support for both race vehicles.  Land Rover is assisting the team with parts, logistics, vehicle and financial support throughout their 2014 campaign.  In addition, two Land Rover Discovery vehicles provided by Land Rover will support Race2Recovery along the assistance route and will provide vital support to the team throughout the 14 day epic.

The 2014 Dakar will see the team race across some of the world’s most unforgiving terrain.  This year’s competition will traverse three countries; Argentina, Bolivia (motorcycles only) and Chile. They will travel over 9,000km, including crossing the Atacama desert and the Andes mountain range, in temperatures that could reach between 40 to 50 degrees celcius.

Speaking at the start-line in Rosario ahead of the challenge, team founder and driver,  retired Captain Tony Harris said: “We’re delighted to be back in South America for our second Dakar challenge.  The memory of finishing last year’s race is something we’ll always treasure but we always wanted the Race2Recovery team to become a sustainable rally team so it’s fantastic to be entering our second Dakar.  We learnt a lot from last year’s competition so we feel extremely well prepared for the challenges that this race will inevitably throw at us.

“The 2014 Dakar signals the start of a massive year for us.  Our sponsor Land Rover has confirmed that the brand will support our entry into the new ‘Defender Challenge by Bowler’ race series that launches in the UK in March this year.  That provides us with a fantastic platform to train up new recruits and develop our skills ahead of future Dakar challenges.  It also enables us to race in front of UK crowds, something we love doing as the support we’ve received from motoring fans and the public in general has been incredible.”

Mark Cameron, Global Brand Experience Director, Jaguar Land Rover, said: “We’re very proud of our association with Race2Recovery, having been the team’s lead sponsor since its inception.  The team has broken down barriers relating to disability and motorsport and truly lives up to its motto ‘beyond injury, achieving the extraordinary’.  The Dakar is the ultimate race and one that has a long association with Land Rover vehicles.  We’re pleased that the team can benefit from our support and we wish them the very best of luck.  We’ll be following their progress all the way.”

Land Rover has also announced that it will be an official partner of the Red Bull Desert Wings team.  Red Bull has chosen Land Rover as the official vehicle supplier for the 2014 Dakar due to its advanced all-terrain expertise and technology to support the various teams under the Red Bull Desert Wings collective. Five Land Rover vehicles have been supplied including Defender, Discovery, all-new Range Rover and Ranger Rover Sport.  The Race2Recovery team will benefit from this association as they will be welcomed on a daily basis into the Red Bull bivouac, providing Race2Recovery with additional resource and infrastructure.