Mark, 52, lives in Risca in South Wales with his wife of five years, Jenny. They both have a learning disability. Mark is supported every Friday by Tony from Mencap who has worked with Mark for over ten years. The pair are good friends. Tony remembers back to when he first met Mark:

“I am very proud of him. Mark is very different to the person he was 10 years ago which just goes to show the ability people have if you support them well. Mark had absolutely no confidence and was often bad tempered. I supported him intensively at the beginning, helping him to see he could achieve. We even did a half marathon and wrote letters to the Queen! He’s a different man now; he’s a fixture of the local community and only needs limited support to manage his bills and paperwork.” 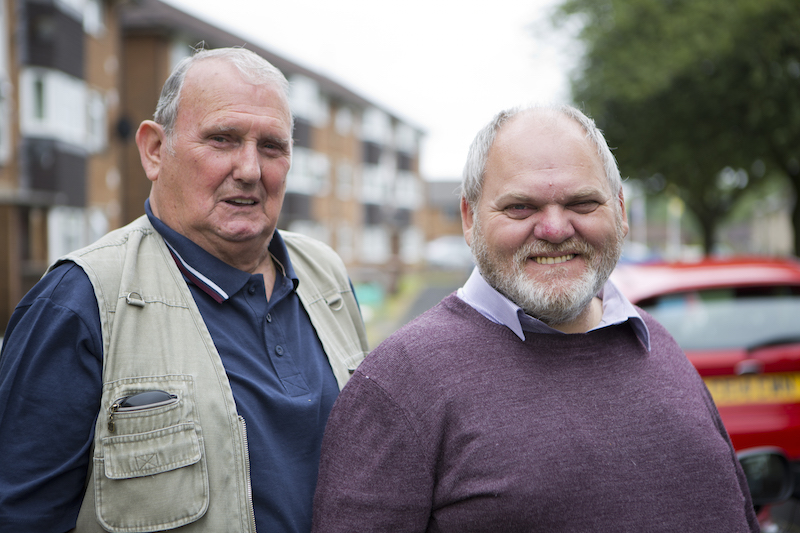 I’ve been volunteering for the Royal Voluntary Service (RVS) for about 5 years. I was fed up of being stuck at home and one day I saw a sign in a shop window where my wife Jenny works saying they were looking for volunteers. I rang them up and Mencap helped me with my application form and I’ve been there ever since.

I like giving back to the community. The first job I had was taking a dog out for this chap because he had brain cancer and couldn’t mind his dog anymore. I was only with him for a month and then he died.

From there I was at a bit of a loose end and I went along to an RVS event at the Newport Centre. They were advertising a volunteer position to support an old man to go shopping. So I went along to an interview and when I was there, a lady called Martha came in who I knew from my church. It turned out she was the manager at the care home. She said, “What are you doing here?” I said, “I’m hoping to get a job.” I think it helped that I knew Martha and she could vouch for me, so I ended up getting the job with Phillip.

In the beginning it was a bit hard because he had problems with breathing and his mood could change a lot – one day he’d want you there and one day he wouldn’t. Phillip had lung disease from working with asbestos when he was younger. In the beginning he used a walker and we’d go shopping by taxi, but in the end he got so bad he ended up in a wheelchair.

I think we got on pretty well. They were going to give me to someone else, but Phillip wouldn’t let me go. He died earlier this year.

Now I’ve got a new position at the Royal Gwent Hospital. Every Monday and Thursday I take round the trolley with drinks and sweets and newspapers. It can be hard seeing all the sick people – cancer patients, people with limbs missing and all that – but it also makes me feel grateful for my health. Often people just need someone to chat to and I try and have a quick chat with people when I’m doing my rounds.

My wife and I also go and help out at Oxford House for a week every September. Oxford House is an adult education centre and we help to mentor students with a learning disability. I help out with the computer course and the basic skills course.

I think the new students are often feeling nervous, because they haven’t been in the building before and they probably don’t know the tutors and many of the other students. I think we help by giving them confidence and by looking after the ones who are lonely or on their own.

Theatre Ffynnon supports people with disabilities and mental health issues to get involved in the arts. I’ve been with them for about 5 years now. My wife and I are doing four productions with them this year and we rehearse nearly every Thursday. I have just finished mentoring another actor called Ollie who has a learning disability. He’d never worked with props before. Using props can be difficult sometimes so I’ve been showing him how the props can help tell the story and also the importance of timing when using props. I’ve talked about lighting too and how important it is that you are aware of the lights and where you should be on stage.

We were working on a play called Unique Me which we played to a full house on the 19th and 20th November 2015. The play is all about memories – it moves from scenes in a library to a holiday, to a disco and other places. I did a blog about it for Theatre Fynnon’s website.

And just to squeeze in a last few bits I’m in a choir called Soma which is part of the church I go to and I’m on the local board of a charity called Moose International which supports children and widowed women. At the charity, I went from a foot soldier as it were and now I’m the Governor and Jenny is the Lady Vice Chair. We arrange fundraising activities to help charities who work to support our causes. We put on fetes, we go and do collections at supermarkets, we do a carnival and all sorts.

Friday and Monday nights are the only time I have time to myself but I wouldn’t have it any other way. I normally just collapse on the sofa and watch TV – I love old westerns!

My life is very different now. Ten years ago I was very lonely but by helping others I have given back to the community and become a bigger part of the community myself. It makes me feel good inside.

Only four clubs in the Championship meet the needs of wheelchair supporters, finds Revitalise