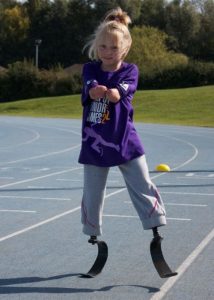 LimbPower held the inaugural Junior Amputee Games on 15th/16th September at Stoke Mandeville Stadium, and the lucky young participants were cheered on by their heroes Stef Reid and Gemma Collis fresh from their Paralympic success.

Over the two days, 54 children aged between 6 and 18 years old were able to try a variety of sports including sitting volleyball, cycling, athletics, football and swimming. “Participation in the Junior Games is so vital in the development of athletes. Of course, the athletes will learn new skills and competition tactics, but the most important thing they will learn is that sport is fun,” said Stef Reid. “Sport taught me to be proud of my body again, and helped me to accept and deal with my accident. It encouraged me to accept new challenges, and reminded me that I really can do anything!”

Among the participants were 8-year-old Ellie May Challis, a quadruple amputee well known to the world’s internet users as the lovely little girl photographed on the running track with Oscar Pistorius which has circulated widely on social media channels. “What an amazing and inspirational day, Ellie loved every minute,” said Paul Challis, Ellie May’s father.

Amongst the older children there were some who shone through in particular, with 15-year-old Nicky Maxwell showing real talent on the track. The Junior Games gave kids like Nicky, a congenital right BK amputee the opportunity to demonstrate his abilities to a wider audience, with perhaps an eye on a future as a Paralympian himself. Nicky’s mother Lucy said; “My son and I had a very special day at the LimbPower Junior Games. It was great for Nicky to able to try out so many different sports in an environment where perhaps for the first time he felt entirely normal.”

LimbPower has run the very popular Amputee Games for the past five years, with the 6th Games scheduled for 18th/19th May 2013, but this was the first time that they had offered an event specifically for children. “We knew that there were kids out there who wanted to try sports themselves, but we were overwhelmed by the response we had from them. It was incredible and hugely inspirational to see them throw themselves into sport and really have fun,” said Kiera Roche, LimbPower founder and organizer of the event. “ To have sporting heroes like Stef and Gemma fresh from the Paralympics there to offer encouragement and advice was the icing on the cake.”

Following the success of the event, it is sure to become a regular fixture and both LimbPower and the children are looking forward to more sporting fun.

LimbPower – The British Ambulant Disabled Sports and Arts Foundation was founded in 2009 with the aim of offering relief to the physically disabled by aiding rehabilitation and improving quality of life through the medium of sports and arts.

The Amputee Games were launched in 2008 and have become a much anticipated annual event introducing primary amputees to a wide range of sports, helping many of them with their rehabilitation and leading to a long standing interest in sport, and for some even Paralympic-level success. The 2013 Games will be held at Stoke Mandeville Stadium on 18th/19th May. Registrations will open next month, with 100 places available. For full details, check the website www.limbpower.com.