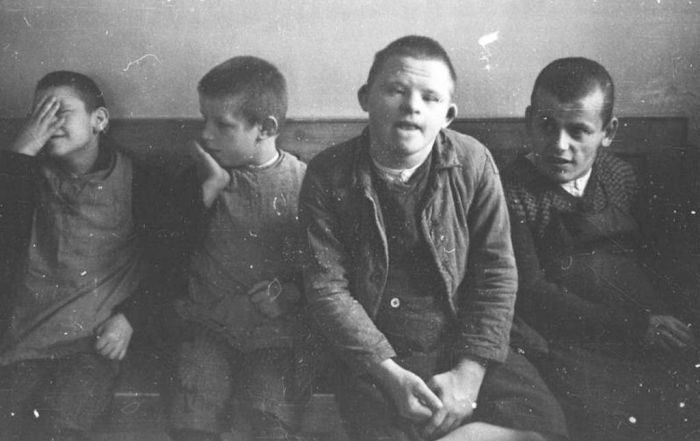 In the 1930s and 40s, between 11 and 14 million people were killed at the hands of the Nazis, from the party coming into power in 1933 until the end of World War II in 1945. Among them were 200,000 people with disabilities. Here, we find out more about the lives senselessly lost, and why it’s important that we learn from the evil carried out by Hitler and his supporters

Imagine being told by a medical professional that your newborn daughter – the person you’ve spent nine months desperate to meet – has Down’s syndrome, and that she has to be taken away immediately, by order of the authorities. She’ll go to a special facility, you’re told, where she’ll get the care she needs. The facility is miles away from home though and you’re restricted in how often you can see her. You don’t have a choice in the matter.

You try to arrange to see your daughter, but every attempt is blocked. Months later, you receive word that she has died from pneumonia, her body cremated.

Heartache, guilt, anger, confusion – these were all emotions that hundreds of German families felt when they were put in this very position. Only their children weren’t taken to a facility to be cared for, as they were told – they were taken to sanatoriums where they were ‘euthanised’ straight away, all in a bid to purify the German race.

Along with millions of Jewish people, gay people, Romani Gypsies and black people, those with physical, mental and learning disabilities were brutally murdered by the Nazis throughout the Second World War. In 1933, when Adolf Hitler took charge of the party, he legalised the sterilisation of those with physical disabilities, mental health needs and chronic illnesses, accompanied by a carefully-orchestrated propaganda campaign which painted disabled people as a ‘drain on society’.

“Nazi policies, in a really horrible way, were very coherent,” explains Olivia Marks-Woldman, chief executive of the Holocaust Memorial Day Trust. “They were very keen to promote this idea of an Aryan super race. Disabled people were removed first of all to institutions and then the Aktion T4 programme ‘exterminated’ them – that’s their language.”

Aktion T4 was a programme which involved the killing of disabled children. By law, doctors, nurses and midwives were required to report all newborns with disabilities.

“Doctors and Nazi oﬃcials, who had had no sight of the child, could look at the record and mark it with either a tick or a cross and the child would then be removed to an institution,” Olivia explains. Parents had no idea of the fate that awaited their child. When World War II broke out in 1939, adults were included too. Sanatoriums and hospitals were turned into killing centres, where the Nazis experimented with the gas chambers that later became the killing method of choice at concentration camps.

It’s estimated that 200,000 disabled adults and children were killed at the centres during the Holocaust. Not one of the victims deserved to suﬀer the fate that was handed to them.

On 27 January, it’s Holocaust Memorial Day, a day dedicated to the remembrance of those who suffered during the Holocaust under Nazi persecution, and subsequent genocides in Cambodia, Rwanda, Bosnia and Darfur. Up and down the country, events will be taking place, such as ﬁlm screenings and information days, to encourage the public to listen, learn and make a change.

Through the Holocaust Memorial Day Trust, the charity which supports and promotes Holocaust Memorial Day, survivors of the Holocaust, family members and people who have undertaken special projects are sharing their stories. One of those people is Berge Kanikanian. Berge has a learning disability and volunteers with Ealing Mencap. He has experienced his own share of persecution, having been bullied at work by one of his colleagues, a matter he eventually took to the police.

Through Mencap, Berge undertook a course where he learned more about leadership and self-advocacy. On the course, Berge heard about the Holocaust and how disabled people were treated, highlighting that hate crime has been an issue for decades – and while the way in which people suﬀer now is diﬀerent, it still matters. Berge wanted to ﬁnd out more about the Aktion T4 programme.

With support, Berge travelled to Germany and Poland to visit some of the killing sites and create a ﬁlm.

“It was a very, very sad thing, ﬁnding out about people with learning disabilities and what they went through,” Berge says. “The Holocaust is really important for people to know about – it’s about hate crime towards people with disabilities. Thousands of people died.”

Berge’s trip made him determined to change people’s attitudes towards disabled people. He is going to visit schools and colleges with his film to highlight the importance of talking about disability hate crime today. “I think for me to go and teach schools and colleges, more people will understand,” he says passionately. “It’s about people’s lives. It’s that important.”

Many minority groups, large and small, still suffer persecution, hated and mistreatment in everyday life. Remembering what happened during the Holocaust – and what’s still happening today – is hugely important.

“It’s really about us coming together on Holocaust Memorial Day and asking what we can do to create the kind of society where that type of propaganda won’t take root,” Olivia says. “Anybody can play a part in making a better future. We don’t need to wait until tomorrow. We can do something today which can help create a more inclusive society, that will bring people together and take a step to improve the world around us.”

The importance of self care