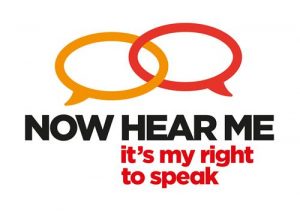 The director of Oscar-winning film, The Theory of Everything, has given his backing to a Scottish campaign that aims to help people like Stephen Hawking who use different ways of communicating.

In a message specially recorded for a conference in Glasgow today [Tuesday 10 March] James Marsh expressed his support for the www.nowhearme.co.uk campaign that aims to improve awareness of people who use ‘alternative and augmentative communication’ and their needs.

Around 120 health, education and care professionals from across Scotland are attending the event, organised by NHS Education for Scotland, to discuss best practice in supporting users of AAC and how to maintain the progress that has been made in recent years.

“I wanted to lend my support to what you’re doing to raise awareness for the difficulties of communicating when you lose the natural ways of doing it. It’s something that we encountered so profoundly in Stephen’s case when we were making the film. We all felt on a daily basis so grateful that we didn’t have those kind of issues in our lives but again felt a great deal of sympathy for those that did. And so hopefully, this will help in a very small way to raise awareness, and what you’re doing will do more so than that.”

It is estimated that there are 26,500 people in Scotland who require AAC, and there are many reasons for this. Communication may be impaired due to lifelong conditions such as cerebral palsy or autism or it may be as a result of an acquired condition such as dementia, motor neurone disease, stroke or head injury.

AAC methods range from the simple – such as picture communication books and gestures – to more sophisticated computer-based equipment running specialist software such as text or other input-to-speech programmes.

www.nowhearme.co.uk is a gateway to information and advice, ranging from a basic video introduction through to a set of e-learning modules that will help everybody to better understand AAC. For the first time in Scotland, it provides easy access to essential resources for all those with an interest in AAC, including those who use it. Other elements of the campaign include online advertising and direct communication to a wide range of Scottish public services such as health boards and local authorities.

“The Theory of Everything is a wonderful film that’s really helped to put these issues into the public domain and we’re delighted with the support James has given us. As the story of Stephen Hawking shows, AAC has incredible potential to improve quality of life, allowing individuals to express themselves, be more independent and, importantly, enabling them to communicate with the people who love them.

“But there are no magic fixes. Different systems will work best for different people. What matters most is the support of the wider community and taking time to listen.”

Campaign focuses on people in Scotland with communication needs