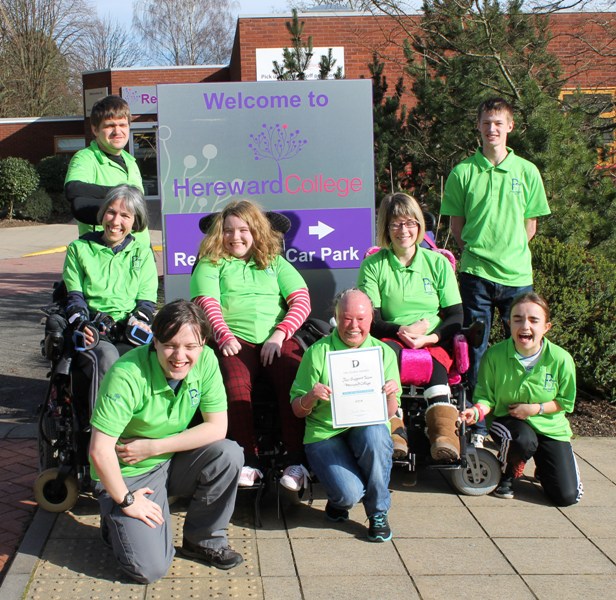 The Peer Support Team at Hereward College have been successfully nominated for the nationally recognised Diana Award. They are among a select group of inspirational young people who have been honoured for their immense impact on society.

The Peer Support Team is a group of volunteer students who support first year students to make a successful transition into college life. Receiving specific training from staff, they get involved in many other activities plus events involving the local community. Their work has been nationally recognised, receiving a Highly Commended in the Leading the Learner Voice Awards 2012 for the significant efforts made by students to raise awareness on the issues of bullying in college and the community.

The Hereward group received their accolade in the ‘anti-bullying champions’ category, for young people who tackle bullying in their schools and communities. Included in their 2013 campaign, based around the theme set by the Anti-Bullying Alliance; ‘The future is ours – Safe, fun and Connected’, the PST wrote their own pledge of responsibility to speak up about bullying, raised awareness throughout the college and ran a poetry competition based on positive relationships.

The award celebrates the success of students and the achievements of young inspirational people, who defy expectation and challenge negative stereotypes that are often applied to them.

A spokesperson for The Diana Awards said: “We were really impressed with this nomination; the Peer Support Team demonstrated exceptional personal qualities.”

Hereward College is a general further education college located in Tile Hill Lane, Coventry, providing both day and residential places. The college welcomes all learners including those with diverse and complex support requirements. In addition to the 100+ residential learners, day disabled and non-disabled learners also attend the college. www.hereward.ac.uk

The government has announced thousands of new special school places