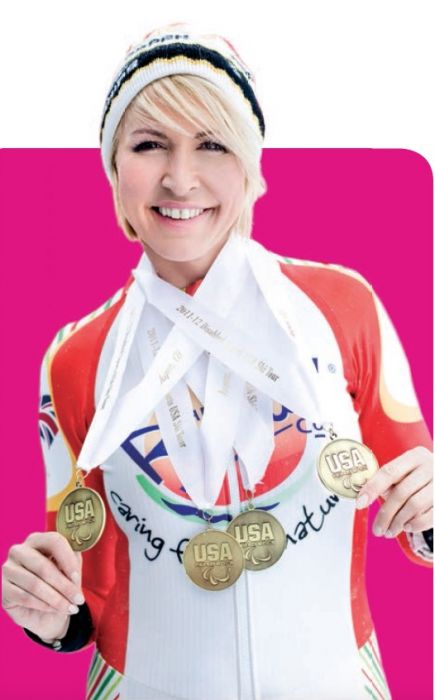 You’ve just taken part in The Jump on Channel 4 – how would you sum up the experience?

I had an absolutely fantastic time on The Jump, it was brilliant. I could not believe how long the days were and how hard the training was. But the privilege of learning seven winter sport disciplines, especially the skeleton, was just incredible. When I was a kid I used to watch the Games in Calgary and I could never imagine having the opportunity to go headﬁrst down the skeleton at 90 kilometres per hour!

How much training did it involve?

How did it feel when you were eliminated on the ﬁrst night?

I was not surprised to go out on the ﬁrst night. In training I was jumping 16 or 17 metres. Abdo at the London Prosthetic Centre did an incredible job making me diﬀerent varieties of interchangeable legs last minute, and we had to really improvise with the ski jumping leg. The components could not handle the slamming of me jumping continuously for ﬁve weeks in training. I was very unlucky that the screw broke one day before the live show.

You ski competitively, but ski jumping is another matter entirely for amputees – were you nervous about it?

I was concerned about the ski jumping, but I knew we would take it one step at a time. James the coach was brilliant, and he was astonished that I managed to eventually go oﬀ the big jump and land without crashing. It was one of the top 10 experiences of my sporting career.

How did it feel to be the ﬁrst amputee ski jumper?

What would you like to see change for disabled people in Britain?

Things have come on a lot over the last 25 years, but there is a long way to go. I don’t think we should depend on what Britain should do though; I think we should make the diﬀerence ourselves and just push through. Stop sitting complaining and start getting up and just trying to do the best we can. It’s proven that this brings about change.

Hearing loss on the world stage with Lewis Vaughan Jones

Inside the mind of Gail Porter