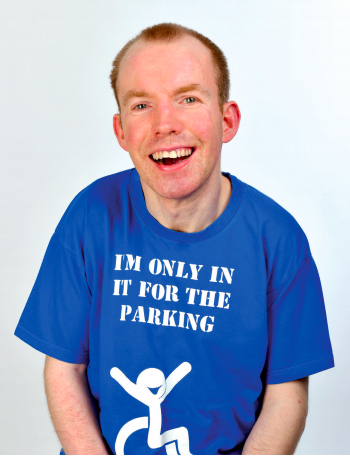 Lee Ridley is a comedian like no other. Under the scrutiny of Simon Cowell (and the general public) Lee, under his stage name Lost Voice Guy, showed that there are no barriers to being funny. He’s brought disability into homes across the UK, one joke at a time.

Congratulations on winning Britain’s Got Talent! When did you realise comedy was for you?

Thanks very much! I don’t think it was ever a realisation, it just sort of evolved over time. I’m a huge fan of the League of Gentlemen, which explains my twisted sense of humour!

You rely on a synthetic voice in your routine. What is it like getting your comedic timing down?

It’s trial and error. Obviously I can’t stop in the middle of my routine as easily as some comedians can, I have to try to predict when people will laugh then put in extra punctuation to leave more of a gap between the words. It’s an art in itself if I’m honest.

You and fellow contestant Robert White, who has Asperger’s, brought disability awareness to mainstream TV on Britain’s Got Talent. How does it feel?

It means a lot that we have both raised awareness of disability in general. Since doing BGT, I definitely had more of a positive reaction from the general public. Whereas they used to stare at me in the street, now they engage with me and treat me a lot more normally. It was really good to see two people with disabilities in the final of BGT, but I’d still like to see more.

I would like to see more disabled comedians booked by comedy clubs, appearing at festivals and being shown on television. Basically, more disabled people being portrayed in a positive light. I’m sick of being part of a group in society who are mostly demonised in the media (unless they can win a shiny medal, of course). That’s exactly why hate crimes against the disabled are on the rise. 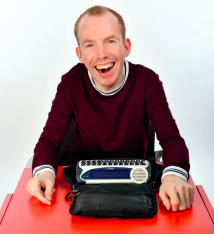 You also have a BBC Radio 4 show, Ability. Where do you get the inspiration?

Ability is about a disabled guy called Matt with cerebral palsy who can’t talk – so obviously it’s totally fictional! He moves out of home for the first time and lives with his best mate, Jess, and has a slightly dodgy carer called Bob. I guess some of the inspiration for the show comes from my own life, but obviously I’ve used artistic licence. For example, I have never dealt drugs or gone shoplifting. Honest!

What are your hopes for the future when it comes to your comedy and shining a light on disability?

If I’m honest, I started doing stand up comedy because I thought it would be a laugh, and that’s still the reason I do it. I’m enjoying the ride, and seeing where it takes me!

The language of disability with Kray-Z Legz

“Labels are for clothes not kids”: River Island’s latest models are children with disabilities