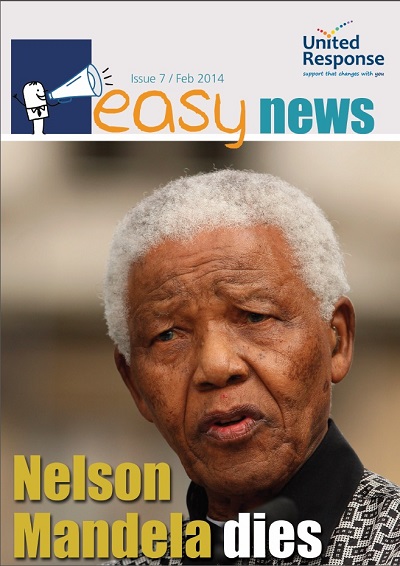 A year on since its launch and the first ever dedicated news magazine created specifically for people with learning disabilities – Easy News – is celebrating, as findings from a readers survey herald the news service a huge success.

Launched by the national disability charity, United Response, at the House of Commons early last year, Easy News set out to provide a regular easy read news source to keep people up-to-date with current affairs and the big issues of the day.

Now in its seventh edition, and with the expertise of the UR Consultants, a group of people with learning disabilities who create the accessible new stories, the magazine now has well over 3,000* readers, many of whom regard Easy News as a primary news source.

United Response recently surveyed subscribers of the accessible news magazine and found that 90 per cent found Easy News easier to understand than more traditional newspapers and TV news programmes. And whilst the majority still regard TV news as their primary source of news, over half now rely on Easy News to keep them up-to-date; with only 40 per cent following the news in newspapers.

One respondent said: “It sometimes takes me time to ‘digest’ what I read. I can go back [to Easy News] and look again and again if needed, without having to navigate through a whole newspaper to find articles of interest.”

Enabling people with learning disabilities to become better informed was one of the key reasons behind the creation of Easy News. A year on and the news magazine is already achieving that goal with some 73 per cent of subscribers now being able to name a recent big news event compared with only 37 per cent a year ago.

Speaking about the success of the magazine, United Response’s Director of Communications and Fundraising, Diane Lightfoot, said:

“Easy News started out with a single aim, to make news accessible for the thousands of people with learning disabilities who found themselves excluded from the debate, simply because information wasn’t being presented to them in an easy to understand way.

“A year on and the stats speak for themselves. More and more people are turning to Easy News to help them stay informed and have a much better understanding of the news as a result.

“From the very beginning Easy News has tried to tackle the complex stories of the day. Some of these have been difficult and even upsetting to translate, but their inclusion in the magazine is vital in order for our readers to stay informed.”

“But there is still a long way to go for Easy News. We are contacted after each edition with suggestions from readers on how we can improve the magazine and make it even more relevant. It’s an organic process, with our readers shaping how they want their magazine to look.”

Easy News is available in downloadable PDF, by post, via email and in audio versions. To subscribe to Easy News and to access the latest edition, go to www.unitedresponse.org.uk/press/campaigns/easy-news/

United Response is a community based charity that works with people with learning disabilities, mental health needs or physical disabilities- including some of the most vulnerable people in our society. To find out more about the work of United Response, please visit www.unitedresponse.org.uk