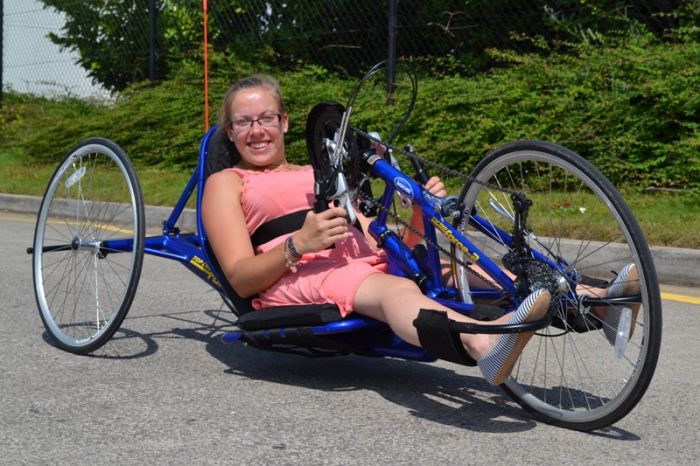 Wheelchair racing champ Hannah Cockroft, along with her coach Jenni Banks and training partner Ben Rowlings, called into Invacare last Friday (25 July) after attending a training session at Swansea University in preparation for the European Championships. The prestigious event where 650 athletes from 49 countries are expected to compete is taking place 18-23 August in the University grounds.

Hannah currently holds the World and British records for the T34 100m, 200m, 400m and 800m and the Paralympic records for the T34 100m and 200m. She is also a double double World Champion and double London 2012 Paralympic gold medallist. Hannah will be competing in the 100m and 800m final at the European Championships this August and is hoping to add to her medal collection.

As well as studying for an undergraduate degree at Coventry University and training for the European Championships, Hannah is looking at her long term plan and is working closely with her coach to retain her double Paralympic champion title in Rio 2016 and compete in the 2017 World Championships that are to be held in London.

Hannah’s training partner Ben Rowlings, age 18 from Newport, is currently ranked fifth in the world in the T34 Wheelchair racing category and is also part of Team GB at the European Championships.

Invacare Ltd based in the UK is part of the Invacare Corporation, Elyria, USA, who is a world leading manufacturer and distributor.  The company designs, manufactures, and distributes an extensive line of mobility and health care products for hospitals and non-acute care environments, including the home health care, retail, extended care markets, and the NHS in the UK. Find out more at www.invacare.co.uk