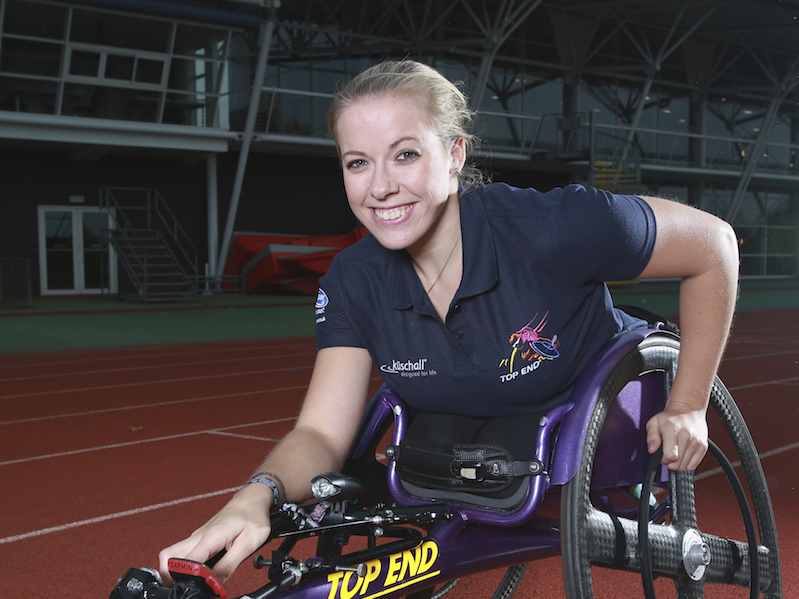 One of the leading names in British parasport, Hannah Cockroft has had an incredible career so far. This year, she’s opening the Naidex exhibition in Birmingham, where she will provide a short talk about her experience as Paralympic World Champion and Record holder – she is a T34 Paralympic wheelchair racer and holds the Paralympic world record for the 100, 200, 400 and 800 metres. She is a Double World Champion, Double European Champion and also won two gold medals for GB at the 2012 Summer Paralympic Games in London. Hannah took some time out ahead of her appearance at Naidex to talk about her sporting career, training schedule and her dream assistive technology.

Who, or what, has been the biggest inspiration for you?

Inside the sport it has to be Chantal Petitclerc. She’s a Canadian wheelchair racer and the most decorated female Paralympian ever, winning 21 medals. She is amazing.

In terms of general life outside of my sport, my parents are my biggest inspiration. They both work full-time, yet still found time to bring me up and my two brothers up, as well as to take me to training every day, cycle with me and drive me to Loughborough for physio every week. I struggle to fit it in and it’s my job. So for them to fit it in after a full day’s work is amazing. And I probably only now really appreciate how hard it’s been for them.

What does speaking at Naidex mean to you?

I’m familiar with the show as my mum is a regular visitor – she works in a special needs school. So speaking at Naidex is quite a big thing for me. It’s a real honour to be asked to speak at the event, which is focused on promoting independence. It’s something that’s very important to me and something I’d like to help more disabled people achieve. If you can get the right equipment it can really help you do everything you want to do by yourself.

I’d hope that my story will show how finding the right equipment and the right inspiration can help others make their dreams come true – and Naidex is the perfect place to find that inspiration, the help and the kit!

If you could ask assistive technology manufacturers for a dream product, what would that product be?

Right at this moment, it would be a drink holder for my wheelchair. I’ve just tried to carry a cup of coffee from the café to the car and it’s gone everywhere!

Otherwise, I’d love a machine that chooses my clothes in the morning and dresses me. I’m up so early, that when I look at myself later in the day I often find a mismatched training outfit!

How did it feel to be awarded an MBE for services to athletics?

It’s all been very surreal, particularly after the success and attention at the London Games. I still can’t quite believe that at 22 years I’ve achieved all of these awards and titles.

But it was a fantastic day receiving the MBE at the Palace with my family. Particularly considering some of the amazing people who were also awarded alongside me, including some real heroes, like Lance Bombardier Ben Parkinson, who lost both of his legs in combat. He risked his life, whereas all I’ve done is push myself along in a straight line. I did feel like I shouldn’t have been there. But it was a real honour.

Do you think the London Paralympics in 2012 left a lasting legacy? If so, what was it?

I think the London Paralympics in 2012 has left a huge legacy for the sport and for the everyday lives of disabled people. It was amazing to see how many people paid attention to us and how many young and old people realised they could also get involved with the sport.

I used to train at Leeds City Athletics Club. I went back after the London Games and took my gold medals to a special event. The growing popularity of the sports after London was obvious. When I trained there, I was one of three. Going back after London, there were 15 people training. I’m not sure people realised that it was possible to have a 9 to 5 job and do wheelchair racing.

Also, being on the team, we’ve had lots of youngsters come along in the last two years. They’re 14 and didn’t know they had sprinting talent until they saw the London Games. So more gave it a go and found they could do it – it’s been amazing.

The sporting opportunities have definitely expanded in the time since London. You don’t get turned away at running clubs any more. And you don’t need lots of specialist equipment or knowledge, just enthusiasm and drive.

Before that we have the World Championships in October in Doha, which is my main focus this year. But training is going well. I’ve changed my distances – London was 100 and 200 metres, but in Rio I’ll be doing the 100 and 800 metres, based on what is open to my class.

It’s a new challenge and is making we work incredibly hard. But I’m enjoying it and it’ll give me a chance to show people I’m not a one trick pony. It gets me up every morning and won’t be an easy win. It’s exciting, but also scary at the same time. And my toughest competition is with my GB team mates who are incredible.

I train six days a week, with a rest day on Sunday. It’s generally two hours training on the track every Monday. Two hours in the gym Tuesday morning focused on upper body weights as it’s very much a shoulder sport, then an hour and a half on the track in the afternoon. Wednesday is recovery day, so it’s one hour pushing and jogging to keep everything moving. Then back on the track for two hours on Thursday and two hours in the gym on Friday. Then it’s physio, before going out on the road for two hours on a Saturday.

What inspired you to study journalism?

I decided not to study sports (I had a place reserved) as I didn’t want to risk hating the sport I love, with so much of my life already focused on it. So, having enjoyed working with the media so much over the past couple of years around the Olympics, I decided to study it further and gain more media skills. I’m only in my second year now, and with some gaps around big competitions, including Rio, so I am aiming to finish in 2018.

What would be your number one bit of advice to other budding paralympians out there?

I’d have to say to anybody that you have to grab every opportunity you get offered. Even though some things didn’t seem particularly interesting or relevant at the time, I just took up every opportunity and that’s what led me to where I am now. You never know where things will lead, and I do believe everything is offered for a reason. So take it and enjoy it.

If you have something you love, take every chance and make it your life.

Hannah Cockroft will be appearing on the opening day of this year’s Naidex on 28 April at the NEC in Birmingham. Naidex is the UK’s leading event for the Independent Living and Disability sector which has been running for 41 years. Over 10,000 healthcare professionals, manufacturers, retailers, government and local authority representatives, carers, end-users and their families attend Naidex each year to keep up to date with developments in the industry, seek advice, upskill, share best practice and source innovative new products to improve lives. Find out more at www.naidex.co.uk.

Interview: The importance of disability representation in the fight for climate change

EFDS marks International Day for Disabled People with ‘Me, being active’ films