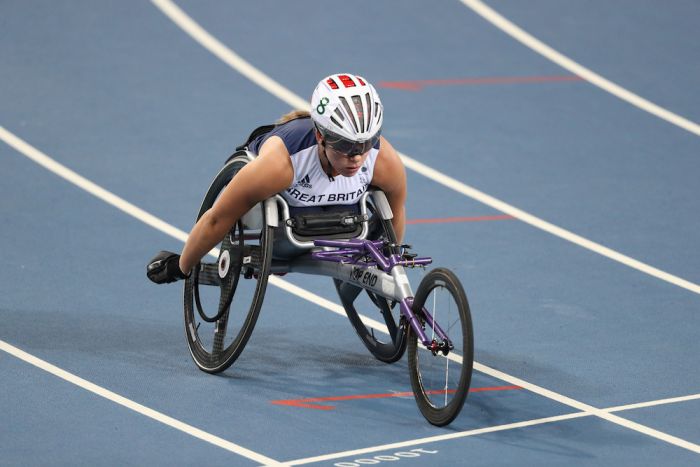 The secret to Paralmypic success? A pair of lucky pants and strawberry  laces – and a whole lot of hard work and talent. Wheelchair racer Hannah Cockroft had a chat with Enable about her career so far

At 24, Halifax native Hannah Cockroft is much like most women her age. She enjoys shopping, going to the theatre, gigs – and she’s got a particular fondness for McFly.

But that’s perhaps where the similarities end. In amongst these common pastimes, Hannah’s travelling the world competing against the world’s best wheelchair racers – and scooping up multiple gold medals along the way.

One of Britain’s brightest parasporting stars, Hannah is the proud owner of five Paralympic golds, seven gold medals from the Para Athletics World Championships, two from the Europeans and two golds and two silvers from the IWS Junior Championships from the start of her career in 2011. Not bad going for someone who didn’t even know parasport existed until the age of 12.

“I went to mainstream schools throughout my childhood, and I was always the only disabled child,” Hannah recalls. “That was fine; I was never treated any different to anyone else, except when it came to sport. I went to secondary school and one of the teachers brought in the local wheelchair basketball team. That was the first time I’d met another disabled person; it was the first time I found out what parasport was. I kept in touch with the coach, and went and started training with the Cardinals. I trained with them for three years, and during that time, they introduced me to wheelchair tennis, wheelchair rugby and I tried different things. Eventually, it came round to wheelchair racing.”

It was the beginning of something special for Hannah. As well as her collection of gold medals, she currently holds the Paralympic and world records for the T34 100m, 200m and 400m – and she’s hoping to push herself even further this summer at the World Para Athletics Championships in London.

“The whole team has been looking forward to getting back to London,” she says with an edge of excitement in her voice. “It’s where it all started for me – it was my first Paralympic Games.”

Could write a whole paragraph here about how amazing he is, but no one outside of my Brothers would understand enough to appreciate him for what he is. So I'll leave it short. My hero ❤️ love you Dad xx #HappyFathersDay 📷 @jodihanaganphotography

Hannah is one of the best-known names in British parasport – and worldwide. Incredible given her parents were told she was unlikely to live beyond her teens. Born with cerebral palsy, Hannah sustained two cardiac arrests at birth, damaging two different parts of her brain. Her balance and mobility were affected, as well as her fine motor skills, and she has weakness in her hips, as well as deformed feet and legs.

To look at her now and what she’s achieved is almost unbelievable for her parents – but not entirely unsurprising when Hannah speaks of her passion for the sport.

“Wheelchair racing was my first opportunity to experience freedom and independence and speed and I just loved that,” she says. “It was always meant to be a hobby – I never meant to go the Paralympics. I’m the kind of person who, if I get offered an opportunity, I’ll take it. I just think, I might as well try it. So I did.”

So how does a world-renowned athlete prepare for a race? Hannah’s methods are slightly more unconventional than most – but she’s terrified to deviate away from her routine.

“I’ve got a lot of superstitions,” she laughs. “I’ve got lucky knickers and lucky socks – I always wear them. It’s a nightmare, trying to find these knickers that are falling apart. I’ve got lucky earrings. I always paint my nails to match either my kit or my chair. And I always eat strawberry laces before a race.”

As well as hoping that her lucky pants will help her add to her medal collection this summer, Hannah is keen to see whether or not the Championships reignite the nation’s passion for parasport. Having witnessed first-hand the real enthusiasm for disability sport at the London 2012 Paralympics, and the years leading up to Rio, she says that things are, sadly, starting to change.

“With London, there was a massive boom,” she says. “Everybody suddenly knew what parasport was and was interested in it, and really took it seriously. In those few years between London and Rio, it just carried on and carried on. I literally could have done a different appearance every single day in those four years. Sadly, I think that that’s kind of died away. Since Rio, the excitement from London has disappeared a bit. Which is upsetting. We’ve really felt a difference since Rio – the whole team have – compared to what we had post-London. I hope that London 2017 can bring that buzz back.”

The real perk of a home event is that Hannah’s family and friends will be able to come and see her compete. In Rio, just her mum, dad and best friend from university made the trip – but this time around, there’s going to be some serious support for Hurricaine Hannah in the stands of Queen Elizabeth Olympic Park.

“It adds a bit of pressure as well to be honest,” she says. “You’re going out in front of all of these people who know how much work goes into it every day. You’ve got to put in a good performance and show them what it’s all about – show them it’s all worth it!”

At 24, Hannah is really at the peak of her career – but being a sportsperson, unfortunately, isn’t a lifelong job. So what has she got planned once she hangs up her racing helmet for the last time?

“I want to move into media, journalism,” she reveals. “I’d love to work in TV. I’m halfway through a journalism degree – I probably should finish that at some point! I hopefully have a few years in athletics left yet before I need to think about that but the media is what I’d like to move into.”

With her passion, drive, determination and bubbly personality, we’ve got no doubt in our minds that it won’t be long before Hannah Cockroft is the golden girl of TV too.

For more information on the London 2017 World Para Athletics Championships, head to
www.paraathleticschampionships.com

The Superhumans are coming to Channel 4