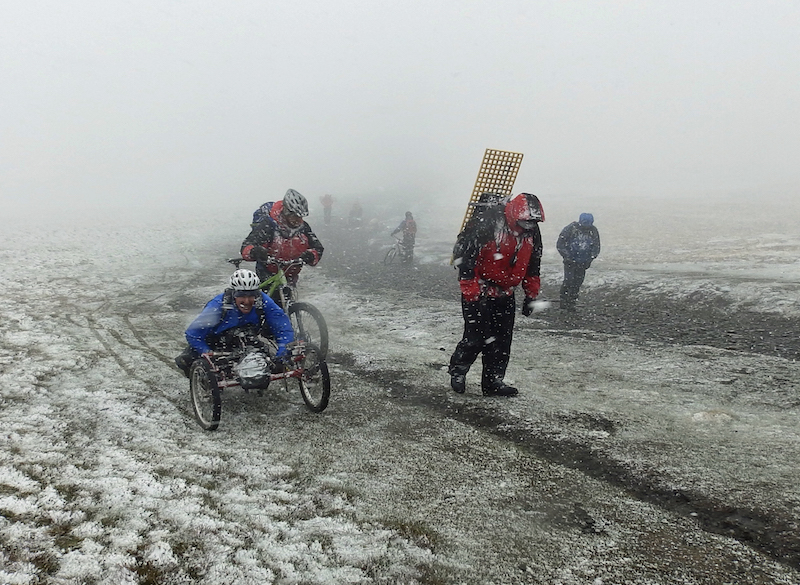 On Saturday 25th April a pair of hardy hand-cyclists and their support crews battled with wind and snow in their bid to climb Skiddaw in the Lake District.

The ride was the latest in a series of epic off-road adventures called “Hand-Bikes at Dawn,” coordinated by ‘Challenge your Boundaries’, a project based at the Coed y Brenin Trail Centre in North Wales which aims to promote and improve access to adaptive mountain-biking. Project-lead Graham O’Hanlon has run these epic rides over the last couple of years, but this was the first outside of his North Wales base.

“We like to take on classic mountain bike routes, such as Cadair Idris in North Wales, and work out how to negotiate them with a hand bike” said Graham. “With a bridleway running to the summit at 931m, Skiddaw is a popular mountain-bike descent, although most riders need to push their bikes up the steep, loose path which has a 20% gradient for much of the initial 2 km. It seemed like a good place to showcase what our riders can do without the option of walking.”

“Our hand-cyclists, Adrian and Keith, were using specially designed mountain bikes which are powered by hand, and have especially low gears to tackle the steep slopes found on the mountain. This means that people lacking strength or movement in their lower limbs can take on mountain bike challenges such as this” explained Graham.

Having had good conditions on previous rides the weather came as a bit of a surprise. “When I first saw the forecasts mention snow, about a week before the ride, we were basking in glorious spring sunshine, and I had thought it was just a glitch in the system; a local village was briefly predicted to have temps of 60oC around the same time and that certainly didn’t arrive” said Graham. “However, this one didn’t go away, and when it was repeated on other sites we had to take it seriously.”  The support crews, consisting of volunteer outdoor professionals and members from North Wales Mountain Rescue teams, were well prepared and un-phased by the conditions. “It was just a surprise to find ourselves back in winter kit” said Graham.

The riders took around six hours to climb the 4.8km from the start-point to the summit. The descent took about 30 minutes!

The ride is raising funds for the ‘Challenge your Boundaries’ project, ‘Walking with the Wounded’ and Mountain Rescue. You can help by donating at www.justgiving.com/teams/HBaD-Skiddaw

Further information about the ‘Challenge your Boundaries’ project and the Hand-Bikes at Dawn ride can be found at www.facebook.com/ChallengeYourBoundaries