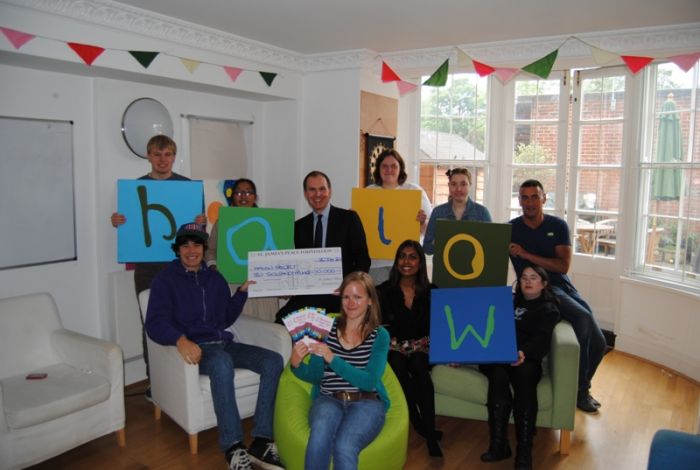 Monday 19th August 2013, at the start of Learning Disability Week 2013, which runs from 19 – 25 August, Guildford-based charity, the halow project, announced it had received a £10,000 grant from the prestigious wealth management company St. James’s Place.

The latest initiative from halow project, A Reason To Get Up! (ARTGU) received the money from St. James’s Place, which has a dedicated grant-making Foundation, funded entirely by contributions from Partners and staff and generously matched pound for pound by the Company.  Established in 1992, the Foundation has so far raised over £30million and makes grants to a number of charities each year.

ARTGU gives young people with a learning disability the opportunity to engage in meaningful daytime activities which will promote practical and personal skill building, and help them gain the same sense of purpose, satisfaction and opportunity for social interaction that other people get from having a job. This will be achieved through the promotion of inclusive activities as far as possible, and thus support community cohesion.

A pilot scheme has already commenced and includes Healthy Living, Creative Arts, Vocational and Recreational pursuits.  It is hoped that the “Watts Going On” activity, where young people use recycled materials to create unique eco-friendly lights, will become a social enterprise company and employ some of halow’s young people.  Sessions are held weekly at the Lockwood Arts Centre and as well as making the lights, they also learn about electrical circuits and solar power systems as well as invaluable experience working as part of a team.

Alan Young, Partner at St. James’s Place and Ambassador for the St. James’s Place Foundation said “I am delighted to support this important local initiative that will do so much to help young people with a learning disability to take their first step towards the world of work.

halow’s work is not just impressive but very much needed, and I would encourage local residents and businesses to think about how they too might support this wonderful Guildford-based charity.”

“Receiving this grant from such an august Company as St James’s Place is a real boost to halow,” said Paul Donetta, Commercial Director of the charity “it will enable us to expand the range of activities which will help boost young people’s self confidence, give them a sense of belonging and increases their aspiration for the future”.

More information about ARTGU and Watts Going On may be found on the halow project website: www.halowproject.org.uk.

Information about the invaluable work being carried out by St James’ Place Foundation is on www.sjpfoundation.co.uk

Learning disability: a battle for information