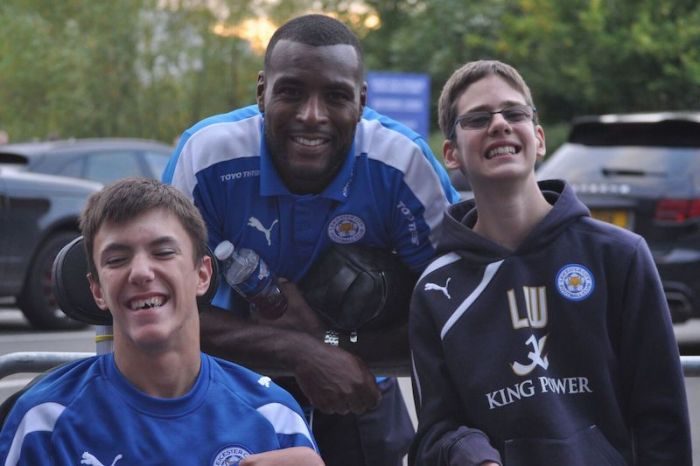 Only 7 premier league clubs have stadiums that provide the recommended fully accessible toilets for disabled fans, according to a new ‘Toilet League Table’ released today by learning disability charity Mencap.

Changing Places facilities are vital for over ¼ million people who have severe disabilities and require more space and additional equipment than a standard disabled toilet provides. Without them many people with a severe disability are faced with a choice of not going out or being changed on a toilet floor.

The average Changing Places toilet can be provided for £10,000, or:

Mencap’s Toilet League Table offers a snapshot of the work Premier League clubs have been doing to make their grounds accessible to all fans. Liverpool FC topped the table, while Crystal Palace, Chelsea and Tottenham all face ‘relegation’.

Mencap, which is part of the Changing Places Consortium is calling on all Premier League clubs to honour the promise they made in 2015 and ensure football is accessible for all fans by installing Changing Places toilets by the end of 2017.

“I don’t think all football clubs really think about how difficult it is for people like me to go to the toilet in their grounds. It’s often really tight and there isn’t space to be changed so you have to lie on the floor of a public bathroom, trying not to hit your head or think about the dirty floor you’re lying on. Installing a Changing Places toilet so fans don’t have to lie on the floor of the loo is an easy thing to do.

“I campaigned for my football club Leicester FC to install a Changing Places toilet and having one in the stadium makes a big difference to me and other fans with a disability. I’m a season ticket holder and it’s good to know that I can go to matches whenever I want without needing to worry, I’m proud that my team cares about all their fans.

“To the other Premier League teams that are yet to install a Changing Place toilet I want to say, look at Leicester, look at what they have done and the difference it has made to fans, if they can do it so can you.”

“It’s inexcusable for over half of the Premier League to be without fully accessible toilets for all disabled fans. Nobody wants to leave a game halfway through to go home just to use the toilet, but without a Changing Places facility the only other option is the degrading experience of being changed on what may be a dirty, unhygienic toilet floor. This is not a choice anyone should have to make.

“We are nearing the 2017 deadline for the accessibility promise that 17 of the current Premier League teams signed up to yet many are no closer to fulfilling that pledge than they were in 2015. For such big clubs there is simply no excuse. They have the space and the money to install Changing Places or at least temporary Changing Places solutions like Mobiloos’, for teams expecting to move stadiums.

Check out the Accessible Toilet League Table below: 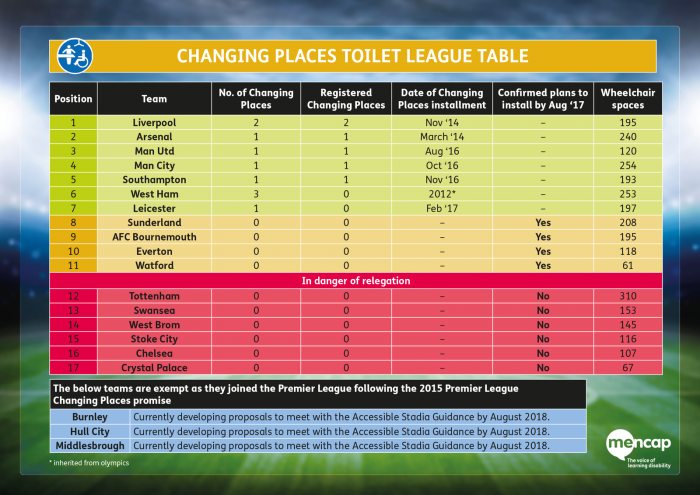 7 out of 10 disabled people want to get more active

Matt aspires to become a Paralympian at age 2