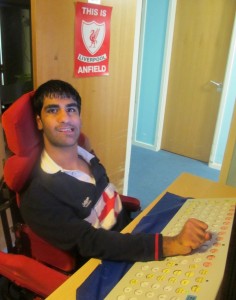 A writer with severe disabilities graduating from the University of Derby with a First Class Journalism degree is now using his talents to help others in a new role.

Despite these challenges, his passion for writing has seen him write articles on his beloved Liverpool FC and be published on the team’s website, and in the University of Derby Students’ Union’s Dusted magazine on its sport teams, whilst also achieving a First Class BA (Hons) Journalism degree.

Imraan will receive his degree at a University Awards Ceremony on Friday (January 18). More than 2,500 students are set to pick up their degrees during Thursday (January 17) and Friday, at Derby Assembly Rooms in the city centre.

Imraan said: “I’ve always been passionate about writing. When people are reading my articles they are judging me on my writing ability and my ideas, not my disability or the wheelchair I use.”

He added: “I looked at a number of universities in the Midlands but decided to come to Derby because it had great facilities for disabled students. I’ve had a great time doing my degree here and plenty of help, such as note-takers for my lectures.”

Imraan’s studies have led to him securing a role as a Press Officer with Disability Derbyshire, which he became involved with while still a student, firstly as a volunteer worker and then as Vice-Chairman of its board. He will be writing articles for the organisation and helping them publicise their good news.

He has also been doing some mentoring work with students with disabilities currently studying at the University.

For more information on the University’s Journalism course see web link www.derby.ac.uk/courses/journalism-ba-hons and to learn more about its 2013 graduates see www.derby.ac.uk/graduation