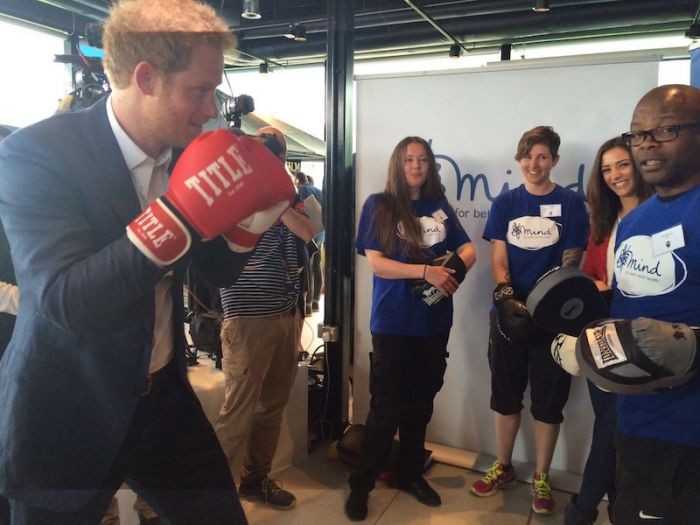 The Duke and Duchess of Cambridge and Prince Harry came together with charity Mind yesterday (16 May) to launch their ambitious new campaign Heads Together at the Queen Elizabeth Olympic Park in London to change the way we talk about our mental health and wellbeing.

Mind is delighted to be a partner in this new initiative, along with seven other mental health charities, which aims to make people feel comfortable with their everyday mental wellbeing, feel able to support their friends and families through difficult times, and ensure that stigma no longer prevents people getting help they need.

The launch event saw pop star and Mind ambassador Frankie Bridge come together with former professional boxer Duke McKenzie, to exhibit the innovative Boxercise sessions that he usually runs at Mind in Croydon. He was given the chance to show the Duke and Duchess and Prince Harry how this high octane exercise can boost your mental wellbeing.

Two participants who regularly attend Mind’s classes, Stephanie Ware and Jade Jennings, spoke to Their Royal Highnesses about how they have found the sessions transformative for their mental health.

The Heads Together campaign is encouraging people to take positive and simple steps to look after their mental health and wellbeing. It’s well known that exercise is good for our bodies but there’s evidence that being active improves our mental wellbeing too. Many of our local Minds across England and Wales offer structured physical activity programmes such as Boxercise, Thai Chi and even laughter yoga, as it can play a key role in someone’s recovery from a mental health problem and in staying well long term.

Heads Together will also be the 2017 Virgin Money London Marathon Charity of the Year with hundreds of runners representing the campaign to raise awareness of mental health and raise vital funds for the mental health charities.

Mind Chief Executive Paul Farmer said: “Heads Together is a really exciting new campaign being led by the Duke and Duchess of Cambridge and Prince Harry with the potential to transform the way that we think and talk about mental health and wellbeing.

“We are delighted that Their Royal Highnesses are joining the growing movement that is fighting to end mental health stigma. Our Time to Change campaign, which we run with the charity Rethink Mental Illness, has made great strides to change public attitudes about mental health but we have always said that we can’t take on the challenge alone and to have the backing of these global icons is phenomenal.

“We hope that in the run up to the Virgin Money London Marathon in April 2017 we’ll be able to inspire people across the UK to have conversations about their mental health and to get active. We all have mental health, just like physical health, it is part of everyday life and needs to be looked after.”

Mind ambassador Frankie Bridge said: “I’m so thrilled to have been at the launch of the Heads Together campaign alongside the Duke and Duchess of Cambridge and Prince Harry. As a long term ambassador of mental health charity Mind, it’s so exciting to see mental health being put in the spotlight this way. Heads Together has the potential to transform the way we all think and feel about mental health for the better. I hope that the public will all get behind this campaign, start sharing their own stories about mental wellbeing and that we can put an end to the stigma of mental health problems.

“It was amazing to join the Duke and Duchess of Cambridge and Prince Harry in the Mind Boxercise sessions and tell them more about the incredible work that Mind does across England and Wales.”

Former professional boxer Duke McKenzie said: “Exciting times ahead. The fact that the royal family have put their stamp of approval on the subject of mental health signifies the importance of getting the message out and stopping the stigma attached to mental health problems. With the royal seal of approval, it can’t fail.”

Stephanie Ware said: “I feel slightly overwhelmed. It’s been an amazing experience to meet all three of the royals. They are really lovely, humble people and you can see their passion for this issue shining through.

“The name Heads Together is great because it’s about what is going on inside. Talking about mental health is just as important as physical health, in fact probably more so because it’s unseen. The royals together with Mind and other charities will be a real fighting force. The partnership with the London marathon will reach so many people to get their heads together and talk about mental health and reduce the stigma.”

Jade Jennings said: “I’m feeling overwhelmed and incredibly proud to be here with Mind. We’re getting the message to the public that it’s ok to get help and you can move forward. The stigma is reducing but to have the support of these three very high profile people is marvellous. They are so genuine and caring they will truly make a difference. It’s so exciting that we’re going to be talking about this campaign up to the marathon and hopefully beyond.”

Coming out lockdown with a disability