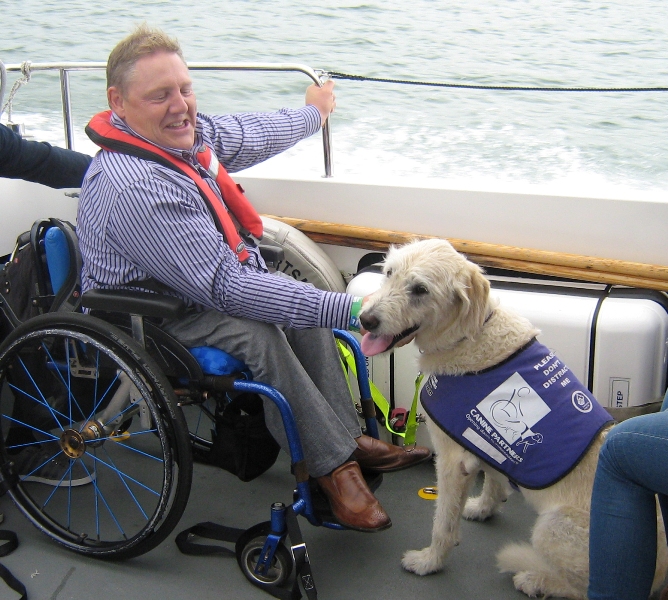 The accomplished yachtsman, who was the first disabled person to sail the Atlantic unassisted, gave permission to board his Wet Wheels boat to two of the Charity’s partnerships at the show’s quayside.

Geoff issued the invitation to join him for the trip after he heard how the Charity’s dogs can assist a person with disabilities with everyday tasks.

Canine partners trustee David Filmer with labradoodle Zack and former Royal Navy Green Beret Steve Brookes with Labrador Kizzie made their way along the gangplank to meet Geoff before a short trip on his 9m Cheetah Catamaran in the Solent at West Quay, Southampton. 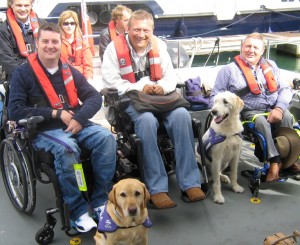 Once firmly settled onboard Wet Wheels made its way out for a 25knot cruise past the Show’s floating exhibits powered by two huge Suzuki V6 300bhp outboard engines.

Speaking at the quayside Geoff said: “This is the first time I’ve had assistance dogs onboard, I am amazed by how well behaved they are and how they can adapt to the change and challenges of being onboard.

“Having watched the bond that the dogs have with their partners I can see what a difference they make to someone’s independence. It’s been a pleasure to have them with us today.”

Steve, of Fareham in Hants, added: “This has been a great, fun day out and it’s been a privilege to be the first assistance dogs onboard with a sailor like Geoff. Kizzie took it all in her stride, even at 25 knots.”

Steve, like Geoff, was injured in an accident which left him in a wheelchair. His life before being partnered with Kizzie was difficult and he explains: “Coping with the transition from an active lifestyle into a wheelchair was soul-destroying for me as I could see the effect it was having on my family. I could only interact with my children from a wheelchair or bed and I was understandably depressed.

“But Kizzie has given me my life back and in particular the close relationship with my children. I can now take them to the park to play with Kizzie or to the woods. She has given me a new lease of life.”

Canine Partners is a national charity that trains assistance dogs for people with physical disabilities including civilians and members of HM Armed Forces.

The dogs are trained to help with everyday tasks such as opening and closing doors, unloading the washing machine, picking up dropped items, pressing buttons and switches and getting help in an emergency. They also increase independence, confidence and self-esteem and bring companionship, a sense of security and increased social interaction.

Geoff Holt MBE was a professional yachtsman with many ocean crossings under his belt until he was paralysed in a swimming accident in 1984. Today he commits much of his life to championing disability awareness and engaging others in the training and development of the disabled and able-bodied to help them attain their full potential whether in sporting or other endeavours and to inspire everyone he touches to recognise and harness those innate qualities in themselves.

Canine Partners is a registered charity that assists people with disabilities to enjoy a greater independence and quality of life through the provision of specially trained dogs, whose well-being is a key consideration. Find out more at www.caninepartners.org.uk