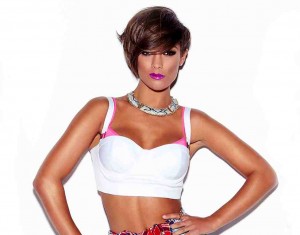 The Saturdays singer Frankie Sandford is wearing her heart on her sleeve today (Thursday 15 August) and fronting a new campaign for Time to Change, the mental health anti-stigma programme run by the charities Mind and Rehtink Mental Illness, which aims to stamp out the stigma that surrounds mental health problems.

Alongside a host of celebrities including Ricky Hatton, Russell Kane, Suki Waterhouse and This Morning’s Matt Johnson, the ‘Issues’ and ‘What About Us’ singer has been seen wearing a heart-shaped fake tattoo designed by contemporary British artist Stuart Semple, to support Time to Change’s Time to Talk  campaign.

Both Frankie and Matt have talked openly about their experiences of  depression to help tackle the discrimination that many people with a mental health problem still face. A recent survey commissioned by Time to Change showed that nearly half of 25-35 year olds (45%) say that people in the public eye, such as Frankie, have made them more aware of the stigma that surrounds mental health problems.

The new research also shows that over a third of people (39%) say that hearing about a celebrity talking about their own experiences in the media has made them think more positively about mental health in general.

The Saturdays’ Frankie Sandford said: “Mental health is still such an awkward subject, yet if someone was going through another physical illness we wouldn’t hesitate to ask them how they’re doing.  When I experienced depression, I had the support of friends and family which really helped – being able to talk about it is really important.

“I hope by supporting Time to Change I can raise awareness about the importance of starting a conversation.  If you know someone experiencing a mental health problem, you could ask them how they are, or send them a quick text to let them know you’re there – it can make a huge difference and remind them that they’re not alone.  We all have mental health, so it’s something we should definitely learn to be more open about.”

Time to Change Director Sue Baker, said:  “Mental health problems can happen to anyone, famous or not, and we all need the support of those around us when it happens.  But as this research shows, celebrities like Frankie and Matt speaking out can help the public to think differently about mental health.  Hearing from someone in the public eye can help others to feel able to say ‘I’ve gone through that too’.

“Through our campaign we hope to encourage people to talk to friends and family members who have a mental health problem – it’s amazing how powerful a simple conversation can be for someone who is going through a difficult time.  We need to start these conversations today and realise that it isn’t as scary as we all think. The more we’re able to speak openly about mental health problems, the earlier people will be able to seek the help and support they need.”

To start your conversation and find out which other celebrities are supporting the campaign go to time-to-change.org.uk or tweet #Timetotalk

Time to Change is England’s most ambitious programme to end the stigma and discrimination faced by people with mental health problems. The programme is run by the charities Mind and Rethink Mental Illness, and funded by the Department of Health, Comic Relief and the Big Lottery Fund.

For more information go to www.time-to-change.org.uk

Crisis in the learning disability sector