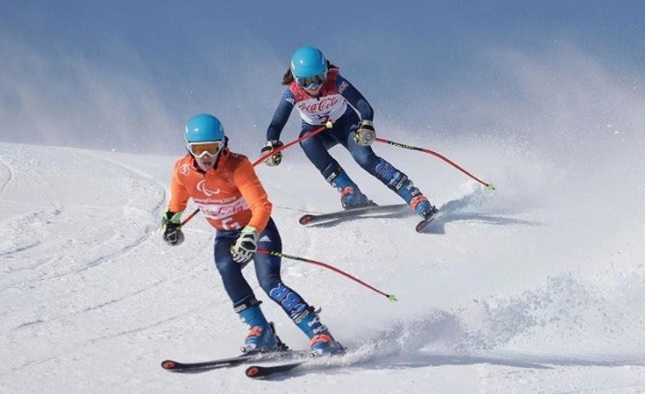 Menna Fitzpatrick revealed a unique way of coping with the pressure after winning women’s VI super-combined silver at the Paralympics PyeongChang 2018 with guide Jennifer Kehoe. The visually impaired Alpine ski team duo had already won super-G bronze on Sunday and they produced two brilliant runs to add a silver medal to their collection at the Jeongseon Alpine Centre on Tuesday.

And, for those wondering what goes through the heads of elite athletes when the nerves kick in and the eyes of the world are on you, Fitzpatrick has a very simple mantra – if surprising.

“In the start gate just before we go out, when the nerves start increasing, I think about butterflies that are drinking tea while doing yoga,” said Fitzpatrick after she clocked a combined time of 2:29.00.

“It came from three different techniques of calming you down,” added Kehoe. “One is having butterflies fly around in your stomach, the next is the tea cup and thinking calm under pressure (t-cup) and the third is yogic breathing.”

Menna added: “When we relax into it and the body is loose and flowing, you can just let your skis do the job and allow your body to feel natural. You’re always going to be thinking about more races to come, we now have two medals which we’re delighted with so we’re just going to give it our all.

Happy Mother’s Day mam! I hope you had a great day and you liked my present 🥈🥈#silver

The pair produced a super-G time of 1:31.49 in the day’s opening session to give them second place, while Millie Knight and Brett Wild occupied third and Kelly Gallagher and Gary Smith sat seventh – the position they would hold at the end of competition. The slope wasn’t as kind to Knight and Wild as they clocked 58.10 while Australia’s Melissa Perrine produced a breath-taking run of 55.32 which proved enough for her to leapfrog the pair and leave them in an agonising fourth.

Knight said: “Fourth is definitely the hardest. Sitting third after the super-G was good, we were happy with that so it’s difficult to drop, but it’s still built on when I finished fifth in Sochi.”

James Whitley was pleased with his times as he finished 11nd in the men’s standing super-combined and is looking forward to racing again tomorrow. “I put down some solid runs and I gave it my absolute all, there’s nothing left in the tank at the end of that, so I’m pretty happy over all.”

All packed and ready to leave Oberried after a great World Cup #2. Lessons learned and bags of experience in the bank. No rest for the wicked though. It’s a hop, skip and jump across to Finland for World Cup #3 in Vuokatti. To keep up with the teams progress on our #pathtopyeongchang & beyond follow: @gbparanordic #worldcup #germany #finland #2 #3 #oberried #vuokatti #biathlon #crosscountryskiing #paranordic #beyondinjury #paralympics

With all these amazing win – the UK is currently holding the most medals – Scott Meenagh says we have only scratched the surface of the UK’s potential in Para Nordic skiing. Saturday saw Meenagh become the first Para Nordic skier to represent Britain at the Paralympics for 20 years and a 13th-place finish in Tuesday’s 12.5km biathlon marked the half-way point of his gruelling competition schedule.

Meenagh said: “I’ve only been doing this for a couple of years but we’re only just scratching the surface, we’ve got a big plan for the future and we’re not going anywhere – the aim is Beijing.”