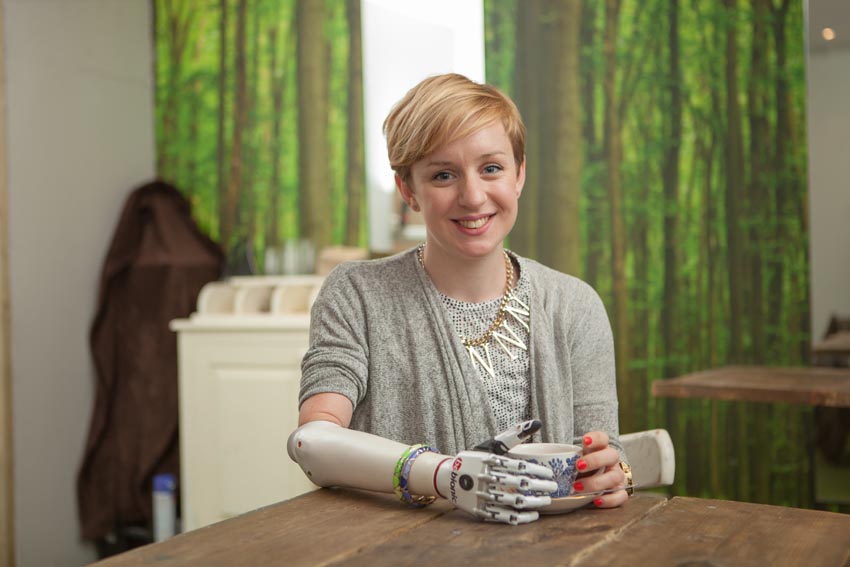 Nicky Ashwell is the first UK patient to be fitted with the bebionic small hand, designed especially for women and teenagers due to its small proportions.

A congenital amputee from London has become the first user in the UK to be fitted with a new prosthetic hand that launches today and sets a new benchmark in small myoelectric hands. Developed using F1 technology and specifically in scale for women and teenagers*, the bebionic small hand is built around an accurate skeletal structure with miniaturised components designed to provide the most true to life movements.

The bebionic small hand, developed by prosthetic experts Steeper, will enable fundamental improvements in the lives of thousands of amputees across the world. The hand marks a turning point in the world of prosthetics as it perfectly mimics the functions of a real hand via 14 different precision grips. A bionic extension of the arm that enables the utmost dexterity will enable amputees to engage in a range of activities that would have previously been complex and unmanageable.

Nicky Ashwell, 29, born without a right hand, received Steeper’s latest innovation at a fitting by The London Prosthetics Centre, a private facility providing expert services in cutting-edge prosthetics. Before being fitted with the bebionic small hand, Nicky would use a cosmetic hand without movement; as a result, Nicky learned to carry out tasks with one hand. The bebionic small hand has been a major improvement to Nicky’s life, enabling her to do things previously impossible with one hand such as riding a bike, gripping weights with both hands, using cutlery and opening her purse.

Nicky, who is a Product Manager at an online fashion forecasting and trend service, said, “When I first tried the bebionic small hand it was an exciting and strange feeling; it immediately opened up so many more possibilities for me. I realised that I had been making life challenging for myself when I didn’t need to. The movements now come easily and look natural; I keep finding myself being surprised by the little things, like being able to carry my purse while holding my boyfriend’s hand. I’ve also been able to do things never before possible like riding a bike and lifting weights.”

The technology behind bebionic small hand
Bebionic small hand works using sensors triggered by the user’s muscle movements that connect to individual motors in each finger and powerful microprocessors. The technology comprises a unique system which tracks and senses each finger through its every move – mimicking the functions of a real hand. Development follows seven years of research and manufacturing, including the use of Formula 1 techniques and military technology along with advanced materials including aerograde aluminium and rare Earth magnets.

Ted Varley, Technical Director at Steeper said, “Looking to the future, there’s a trend of technology getting more intricate; Steeper has embraced this and created a smaller hand with advanced technology that is suitable for women and teenagers. An accurate skeletal structure was firstly developed, with the complex technology then specifically developed to fit within this in order to maintain anatomical accuracy. In other myoelectric hands the technology is developed first, at the expense of the lifelikeness.”

Bebionic small hand at a glance:

For further information on the advanced prosthetic, orthotic and assistive technology products and services from Steeper, please visit www.steepergroup.com.

Tech-Care Event Is A Resounding Success

Technology: RNIB teams up with O2 to improve accessibility for people living with sight loss