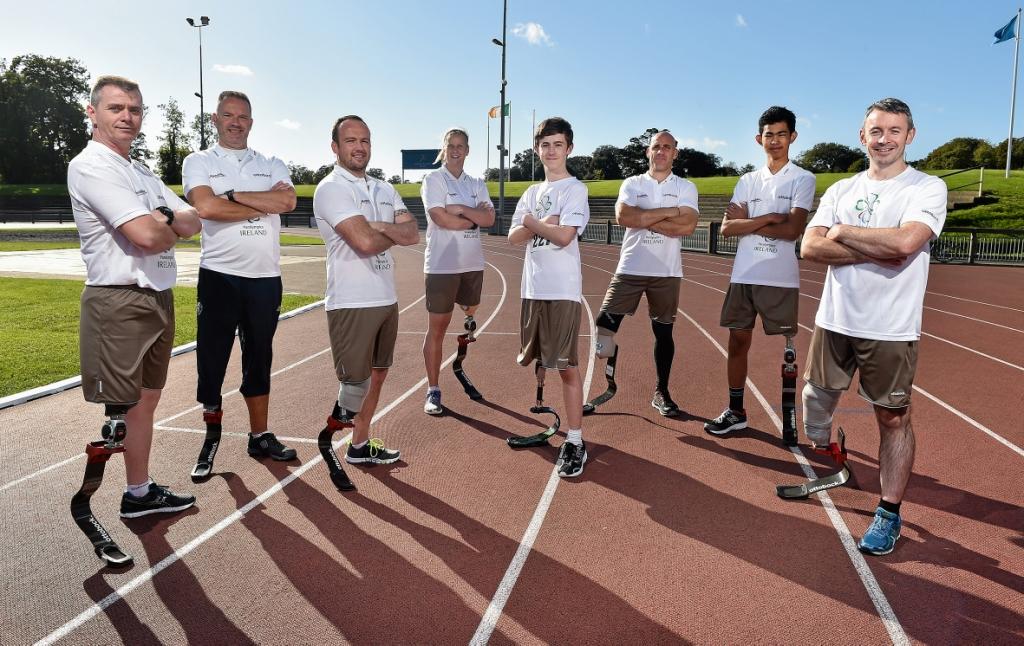 For the first time ever in Ireland, Paralympics Ireland in partnership with proud sponsors Mondelez Ireland and manufacturer Ottobock hosted a running blade demonstration workshop in Morton Stadium, Santry. Eight prosthesis users already active in various sports were given the opportunity to experience the running blades at this unique event. Almost 50 additional participants; all clients and families of Ottobock IDS at Cappagh Hospital took part in an activity session led by Irish Paralympic coaches showcasing the blades and promoting activity among prosthesis users.

This is the first collaborative event between Mondelez Ireland and Paralympics Ireland since their new partnership was announced this summer. Mondelez; owner of popular snacking brands including Cadbury, Belvita Biscuits, Kenco Coffee and the Natural Confectionary Company, signed a three year sponsorship taking the partnership beyond the next Paralympic Games in Rio in 2016. This investment follows the previous three year Cadbury sponsorship at both the London Olympic and Paralympic Games in 2012.

As Ireland has never had a blade runner at a Paralympic Games, the event in Morton Stadium hopes to inspire those in attendance that may have future potential as they witness the eight individuals experience this cutting-edge prosthetic technology. The group were fitted with carbon fibre running blades, custom made by manufacturer Ottobock and were given a dedicated two hour introductory session as they learnt to run on blades for the first time under the expert guidance of the Paralympics Ireland coaches and the prosthetists from Cappagh Hospital.

The event is one of a series of talent and awareness initiatives under the Mondelez sponsorship of Paralympics Ireland and affords the participants a fun and inspiring introduction to Paralympic sport. Ottobock is the world-leading supplier of innovative solutions for people with limited mobility and is the official provider of technical services for the Rio 2016 Paralympic Games. London 2012 Paralympic Gold medalist swimmer Darragh McDonald; himself a client of Ottobock IDS at Cappagh Hospital, attended the event to offer his support to the initiative.

Paralympics Ireland and Mondelez Ireland also hosted a dedicated swimming master class event in the National Aquatic Centre in the afternoon. The event, which featured over 25 young participants, focused on swimmers who may have the potential to compete for Ireland at future Paralympic Games. The tailored training and education session led by Irish Paralympic coaches and leading swimmers including; Darragh McDonald along with double European bronze medalist James Scully, and double world bronze medalist Ellen Keane, was an opportunity for Paralympics Ireland to identify potential talent and guide the participants to the most appropriate route for their development.

Commenting on the events, Corporate Affairs Manager, Deirdre Harte, Mondelez Ireland, said; “Today is a fantastic moment in Paralympic sport in Ireland and we are absolutely thrilled to be part of this unique event which sees running blades being tried, in this capacity for the very first time in Ireland. We are very proud of our partnership with Paralympics Ireland which follows on from previous Cadbury sponsorship, and it represents a continuation of the legacy from the London 2012 Paralympic Games. We are excited to see the possibilities that today might bring for some young Irish athletes and swimmers.”

Cadbury has been a partner of Paralympics in Ireland for the past three years and has worked with the organisation to identify Paralympic talent in Ireland through a number of initiatives during this time including the Paralympic ‘Talent Search’ event post-London and the current Paralympic ‘Fast-Track’ squad.

Liam Harbison, CEO of Paralympics Ireland added; “Hosting today’s swimming and athletics events is something very exciting for us that could be the first step on an amazing Paralympic career for some of those who have chosen to take part. We are very proud to be holding our first ever running blades workshop in Ireland and are grateful to valued partner Mondelez Ireland for supporting us and Ottobock for their huge part in making it happen.”

Find out more about Ottobock at www.ottobock.co.uk

Abby Kane do it! Enable chats to Scottish parathlete ahead of Rio Games