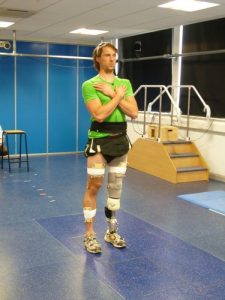 Once a sci-fi vision, but now bionic prosthetic feet are being fitted and provided to amputees in the UK for the first time.

The BiOM has been in development for six years and has been fitted to several hundred amputees in the US and Canada, but has only just become available in the UK.  Its design, invented by Professor Hugh Hurr (himself a double leg amputee), evolved within the leg laboratory at Massachusetts Institute of Technology (Harvard University) and is the first prosthetic foot which provides power to the user, allowing the amputee to walk faster and with less energy.

As Jozef explains: “Following a motorcycle accident in 2009, which resulted in a below the knee amputation of my left leg, I have been very fortunate to receive great prosthetic support and have tried to continue to lead an active life.”  Jozef has been re-training as a ski instructor and is competing in semi-professional road cycle races. He continued: “I try to focus as much of my energy to these high level activities, so it’s important that I rest when I can. Using the BiOM foot for everyday use allows me to use less energy, but I still walk faster!  It’s unlike any other design I have tried, it’s as if my (amputated) leg has come alive again.”

Jozef’s prosthetist at Pace Rehabilitation is Jamie Gillespie, himself a leg amputee with a sporting background.  As Jamie comments: “It’s unlikely that Jozef will leap over tall buildings in a single bound with this new powered foot, or break any sporting records, but he now has the opportunity to walk with a more normal pattern, using less energy as he does so.”  He added: “As a young guy, it’s important that we consider what the long term effect of using a prosthesis will have on his body as a whole.  These improvements to movement will reduce the wear and tear on Jozef as a whole and hopefully keep him performing at a high level in sport and work until much later in life.”

At earlier clinical trials, gait analysis experts at the University of Salford were asked to assess the differences of the BiOM foot over Jozef’s existing (non-powered) prosthesis.  Their studies demonstrated a significant advantage from the BiOM powered system. 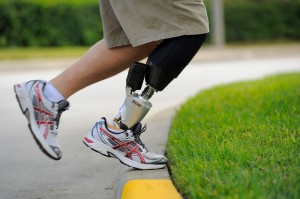 The opportunity to receive the BiOM foot has been made available by Jozef’s legal team at NewLaw Solicitors in Cardiff.  As his solicitor Hilton Obery explains: “By providing this latest prosthetic technology, we’re giving Jozef’s the best opportunity to return to as close to his pre-accident situation as possible.”  He continued: “We are always looking to assist our clients in getting the newest technology and in Jozef’s case he’s the first person in Europe to have this prosthetic.”

At £55,000 for the whole prosthesis, this latest technology is at the cutting edge of design with a price reflecting that.  Jamie concluded: “The current cost is extremely high and we appreciate that it will only be available to the fortunate few at this time.  However, we hope that future developments will allow more accessibility for a greater number of amputees who will surely benefit from this design.”

Find out more about Pace Rehabilitation at www.pacerehab.com