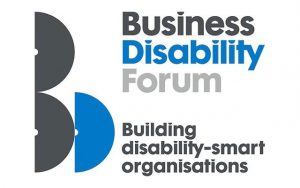 Young filmmakers from universities across the country shared their experiences of living with disability at a unique film festival hosted by Business Disability Forum at KPMG’s offices in Canary Wharf yesterday (20 June).

The filmmakers, made up of students and graduates, were challenged to create a movie in 72 hours for the Forum’s Technology Taskforce Film Festival and share their take on living and working with disabilities. The best films won a slot at the Festival as well as a range of prizes donated by Business Disability Forum’s Partner organisations.

These included a top-of-the-range Lenovo laptop donated by hosts KPMG, an Xbox One from Microsoft, Amazon Echo and Echo Dots from Barclays, an Apple TV and iWatch from Santander and World Cup Wembley tickets from Microlink.

The budding directors and producers wove together themes of disability, business and technology to make their films. The films then went to a panel of judges from Enterprise Rent-a-Car, KPMG and the BBC, who named the winners:

In third place was ‘The Wheelchair Man’, by Trine Hagan, Gavin Roberts and Joey Thompson at the University of Creative Arts, an uplifting story of how student Joey adjusted to life with an acquired disability while at university both by getting used to assistive technology and with the support of others.

The runner up in second place was ‘Why I Make My Life So Hard,’ by Oliver Lam-Watson at Kingston University, which came from a question the filmmaker asked himself about carrying so much gear around in his determination to be an influential disabled filmmaker.

In first place was ‘Big Day’, produced by William Horsefield and Samuel Ash at the University of Wolverhampton, which examines how assistive technology could help someone move into the world of work, through interviews and beyond.

Among the messages of determination and advice to come from the filmmakers was Oliver Lam-Watson’s statement that “I would rather do things differently than not at all,” and Joey Thompson’s powerful words: “My disability didn’t have to define who I was.”

First-place winner William Horsefield had valuable words of advice for communicating with a deaf person: “Try not to be scared.”

Leading employers such as KPMG, Enterprise Rent-Car, Deloitte, Barclays and Transport for London came to the event to gain an insight into what the next generation of disabled talent wants as it enters the world of work.

The annual Technology Taskforce Film Festival was generously sponsored this year by Enterprise Rent-A-Car and hosted by KPMG and aims to showcase emerging talent.

“This year we wanted our Film Festival to showcase the next generation of talent and hear what they had to say on the subject of disability as they prepare to move into the world of work.

“They are part of a generation who have grown up surrounded by technology and who are in most cases digital-native, so it was really interesting to see how disability and technology interact from their perspective. Today’s young people are also among the first to come of age with the legal protection of legislation such as the Disability Discrimination Act and Equality Act in place.

“For employers, too, the films give an idea of what today’s students and graduates expect from the workplace.”

More information about the event can be found here.

And the winning videos can be found on YouTube: https://www.youtube.com/user/EFDVideos/videos

Preparing for university with a disability