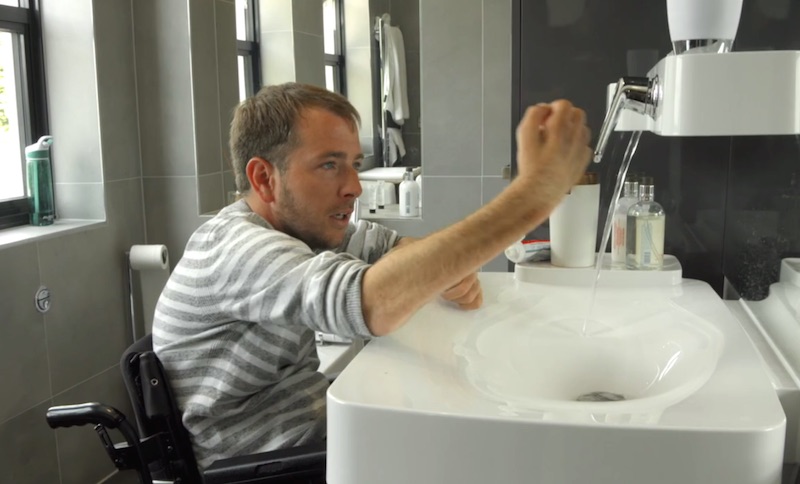 A former cinema blockbuster stunt double left paralysed after a scene went wrong is featuring in a new series of short films and an interactive online guide to show the adaptations that can be made to help disabled people to live more independently.

David Holmes, 30, was left tetraplegic and now uses a wheelchair after an accident when he was working as a stunt double on the set of a major movie franchise in Leavesden Hertfordshire, when a scene involving an explosion while he was ‘flying’ in a harness went wrong.

He instructed specialist serious injury lawyers at Irwin Mitchell who worked with his employers and their insurers to secure a settlement to help with his rehabilitation and pay for equipment to help build an adapted house to help him regain his independence.

The law firm has now produced a series of inspirational online videos alongside David which show some of the special adaptations in his home to help with everyday tasks including:

There is also an interactive online guide to possible changes that can be made to the home called Great Adaptations which runs through potential improvements room by room.

Colin Ettinger, a specialist serious injury lawyer at Irwin Mitchell representing him said: “David is inspirational in his approach to life. He had what some may consider to be a dream job but one accident took all that away from him in an instant and changed his life forever.

“We worked with his employers and their insurers to ensure we could secure the support and funds necessary for David to live as independently as possible and to undergo extensive rehabilitation both mentally and physically to help him come to terms with his disabilities.

“For people who suffer with limited mobility an adapted house is a large part of recovering some of the independence that they were previously used to. We decided to create the video series of David’s home and the interactive guide to show some of the devices and innovations that can be used to help people. Not everyone will be eligible or need all the technology available but even small things such as wider door frames or a larger shower, easy to turn on/off taps and an accessible bed make a huge difference to people’s lives.”

Before becoming a stuntman David was a trained gymnast and was also proficient in high diving, kick boxing, horse riding and swimming. For the past five years he has been undergoing an intensive rehabilitation programme and regular physiotherapy to help with his injuries.

David said: “I spent nine years as a professional stuntman until one stunt went wrong and I suffered a broken neck. In an instant I went from being a young independent man to needing so much help and that loss of independence is one of the hardest things to get over. For the last five years I’ve been trying to get that back and my house has played a large role in enabling that to happen.

“I hope by sharing my story that others going through a similar experience will find some comfort that there is help out there and you can learn to adapt and discover how to be more independent. I haven’t let the accident hold me back and I’ve been determined to stay positive throughout.”

Great Adaptations – The interactive guide to adapting houses for those who have suffered serious injuries is available at www.irwinmitchell.com/great-adaptations.html

Hampshire military man gets a helping hand from Impey Cares