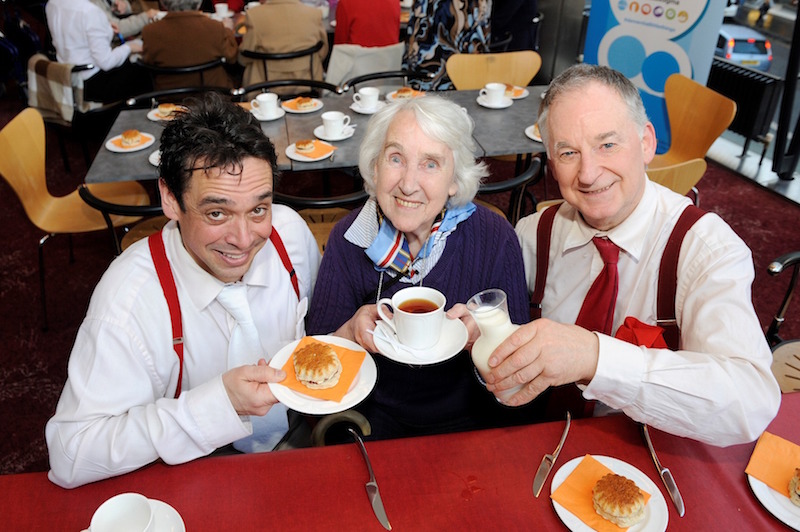 The event was the beginning of the city centre theatre’s work in making its performance and public spaces and that of its sister venue, The King’s Theatre, inviting and inclusive to people living with dementia.

An audience of 120, including people living with dementia , their carers and families attended a performance of A Clean Sweep, a show devised by Plutôt La Vie theatre company and directed by Magdalena Schamberger, one of the founding members of Scottish arts-in-health charity, Hearts & Minds.

Coordinator of the event and Learning and Participation Manager at the Festival and King’s Theatres, Cerin Richardson, said: ‘The Festival and King’s theatres have been developing work for children and young people with additional needs through their Relaxed theatre programme and are delighted to be expanding their participation work to include people living with dementia and their families, so that they can take full advantage of the performances in our theatres’.

Director Magdalena Schamberger said: ‘A Clean Sweep is a play about friendship, making mistakes, dusting yourself off and moving on. We have adapted the existing version of this highly visual story for today’s dementia friendly performance by including live music, softening light and sound cues and focusing even more on the direct contact with the members of the audience. We hope that we have provided a stimulating enjoyable experience and engaged the audience, particularly people living with dementia. I am delighted about today’s audience response and how the performance style and the show’s characters have managed to connect with the audience by sharing their vulnerability and humanity.’

Alzheimer Scotland has welcomed The Festival Theatre Edinburgh’s Dementia Friendly pilot performance. A spokesperson said: “We are delighted that Edinburgh Festival Theatre, Hearts & Minds and Plutôt La Vie have collaborated to create this dementia-friendly performance.  Many people with dementia, as well as those who care for them, can become isolated by the illness and may not feel confident taking part in activities they enjoy. However, there are many things we can do to make going to the theatre more comfortable and welcoming for people with dementia. Whether someone has always liked going to the theatre, or wants to try something new, performances like this are a wonderful way for people with dementia to enjoy a great afternoon.”

The City of Edinburgh Council launched a new awareness campaign this week to highlight the stigma associated with dementia and the little things everyone can do to help. Devised in conjunction with Edinburgh residents who have dementia and their relatives, the campaign is part of ongoing work by a partnership of City of Edinburgh Council, NHS Lothian and Alzheimer Scotland to make Edinburgh a dementia friendly city. To find out more search #dementia6littlethings on Twitter.

The Council identified the necessity of meeting the needs of an aging population by approving plans to work towards making Edinburgh a dementia-friendly city in November 2013. The report published at that time estimated there were 7, 688 people with dementia in the city and expected that number to increase by 62% over the next 20 years. It identified the need to increase awareness of the issues that affect people with dementia and challenge some of the stigmas attached to the condition. In order to become a dementia-friendly city, the partnership will reach out to retailers, public transport providers and partners in the health and voluntary sectors to provide advice about how to help people and service users with dementia.

Hearts & Minds is a Scottish arts-in-health charity that aims to improve the experience of people in hospital and in hospice, residential and respite care by using the performing arts to encourage communication, interaction and laughter. www.heartsminds.org.uk

Plutôt La Vie is a Scottish touring theatre company producing imaginative, entertaining and visually driven performances, the quality of which is recognised by Creative Scotland, press and audiences alike. www.plutotlavie.org.uk

Spotlight on the deterioration of dementia this Dementia Action Week