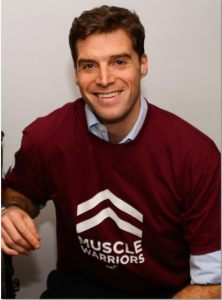 Herts-based charity The Muscle Help Foundation (MHF) is delighted to announce that Olympic rower Tom Solesbury has just become a new Ambassador for the specialist charity. Tom, a world-class rower who competed in the men’s quadruple sculls in the London 2012 Olympics, decided that he wanted to become an Ambassador after attending the charity’s Annual London Fundraiser at The Royal Automobile Club in Pall Mall in November 2013.

MHF delivers highly personalised experiences in the UK known as Muscle Dreams for children and young people with muscular dystrophy (MD) and allied neuromuscular conditions. Its CEO, Michael McGrath, was himself diagnosed with MD at the age of 18; Michael is the first and currently only disabled person in the world to have successfully led expeditions to both the North and South Poles.

Tom said of his decision to become an Ambassador for MHF: “At the fundraiser, I met its amazing CEO and founder, Michael McGrath, as well as a truly inspiring young lady called Becca, who is one of the charity’s beneficiaries. Becca, who uses an electric wheelchair, has Spinal Muscular Atrophy (SMA type-2). To aid her breathing particularly at night time, she uses a ventilator and, despite being prone to catching pneumonia and other infections due to a weakened immune system, she is ambitious, wanting one day to become a lawyer.

Becca’s story and her courage in dealing with her condition was inspirational and put a lot of things in my life into perspective. I approached Michael to learn more about the charity and found that a lot of our values were the same: integrity, honesty, responsibility and compassion. We got on really well and I expressed a desire to help the charity in any way I could”.

MHF is delighted that Tom will be representing the charity, promoting it and fundraising for it. When asked what he hopes to bring to this role, he said: “I rowed at the last two Olympics and am more than happy to share my story as an Olympic rower whether that is with the charity’s beneficiaries, its supporters or future supporters! I am also hoping to raise funds for MHF through an ‘Ironman’ challenge I am planning to undertake this September.  Hopefully, I can help to inspire beneficiaries and raise the profile of the charity, promote it to my contacts and at MHF events, where I am happy to talk about my sporting career.”

Moved by the hard work undertaken by this small, family-run charity, Tom continued: “I was inspired by the way MHF makes an immediate difference to beneficiaries and their families. I was lucky enough to attend the charity’s recent Diversity Muscle Dream Programme at The 02 Arena for two 16yr-old beneficiaries and their families. It was great to meet them and see their evident enjoyment and it was good to see the families relax in amidst a wonderfully caring spirit, hosted by MHF.”

Michael McGrath, CEO of MHF, said of Tom’s new role: “I’m thrilled to welcome such a high profile and sporting Ambassador as Tom, whose own values so closely mirror our own. We look forward to helping him promote awareness of our life-changing work. I’m also really delighted that he’s agreed to undertake an ‘Ironman’ challenge in Sept in aid of MHF – I know for a fact that all his muscles will be severely tested! I also know that he has the right-stuff to finish, so no pressure there Tom … as our tagline says, we are STRONGER TOGETHER! Great to have you on board!”

The Muscle Help Foundation was co-founded by Michael McGrath (affectionately known as the Chief Muscle Warrior). Michael is the CEO of the charity. Muscle Dreams are amazing experiences designed to give children and young people in the UK whose lives are afflicted by the muscle-wasting disease, Muscular Dystrophy (MD) the opportunity to live a dream or fulfil a cherished ambition. www.musclehelp.com