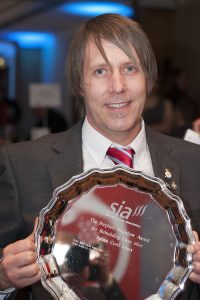 Student and ex-soldier, Gareth Thomas, was awarded twice at the national Spinal Injuries Association’s awards ceremony. The annual ceremony is a glittering charity event that celebrated some of the country’s unsung heroes and attracts support from sport and TV stars alike.

Gareth, a father of one from Powys in Wales, turned his skills to study and research after he became spinal cord injured in a road traffic collision whilst on leave from active duty on Bosnia. Having witnessed the impact of front line conflict, Gareth decided that he wanted to make a difference to military personnel that experience post-traumatic stress syndrome and spinal cord injury. Since 2006, Gareth has been studying hard at Cardiff Metropolitan University, for a psychology degree, a health psychology master and is currently working towards a PhD.

The Spinal Injuries Association recognised Gareth’s hard work and vision twice on 4 June at the Hilton Birmingham Metropole, first with the Armed Forces Achievement Award and secondly as the overall winner of the Rebuilding Lives Awards 2015.

On collecting his second award of the evening, the Stephen Bradshaw Award for Rebuilding Lives, Gareth said:

“Having spent the evening with the other two shortlisted nominees in my category, I didn’t expect to win an award at all. I thank the Spinal Injuries Association for both of my awards and the recognition of not just my achievements, but the achievements of everyone in this room.”

Gareth was nominated for the award by his friend Tony Stephenson, whom he has known for over 21 years. Gareth and Tony both became spinal cord injured at similar times and rehabilitated together at Rookwood Hospital in Cardiff. The pair remained friends after being discharged from hospital and stay in regular touch.

A list of all of the 2015 Rebuilding Lives Awards winners and photos from the event, can be found at www.spinal.co.uk/page/RLSCI

One in three with paralysis not supported in return to work