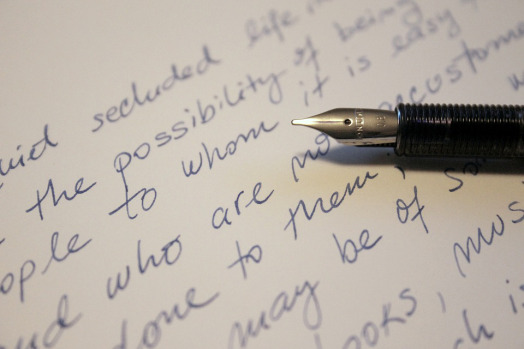 22 year old Stuart McFarlane always struggled at school but didn’t know why. But when he was diagnosed with Dyspraxia in his twenties, everything became much clearer. To celebrate Dyspraxia Awareness Week, Stuart shares his story.

My handwriting has always been my Achilles heel. My high school history teacher used to take out a magnifying glass to read my writing, others didn’t even bother. When I went to university, I hoped that I could maybe find the magic bullet and the solution to my problems. In fact, it got worse. Forced to re-sit several exams and hear even more lectures about my shoddy penmanship, I went on the search for answers. I found none.

That was the story until April this year, when my writing problems were eventually referred to a specialist who diagnosed me with dyspraxia. Suddenly, everything became clearer.

Many of the problems which had plagued through my young life – difficulties with concentration, lack of confidence and self-esteem, bad organisation and time management – now had an explanation beyond a presumption that I had taken a wrong turn somewhere compared to the other, ‘normal’ people.

At primary school, I realised that I found it much more difficult to make friends than others, forcing me to alter elements of my personality just to fit in. This forced me almost towards a split personality, with a public face at school to make friends and a private face at home, much more reserved and unsure of my own abilities.

This attitude has proved a successful one even to this day and despite it being more moderated now than in the past, my life still very much splits into the public and the personal realms.

Good visual of how dyspraxia affects our patients. Functional tasks and occupations can be more difficult than what meets the eye! #OT #COTA #occupationaltherapy #dyspraxia

For many dyspraxics, such experiences of early childhood often represent the first minor trigger point for realising that they may be different from other kids. This story echoes that of the author of the ‘Dyspraxic Fantastic’ blog, Robert Hodge, who was first diagnosed at the age of nine while still at primary school.

Robert says: “When I started school, I found it near impossible to make friends, compared to other pupils. That was my first moment of understanding that I might be different in some way from the others.”

However, while some children, like Robert, are fortunate enough to receive a concrete diagnosis early in life, others have to wait a lot longer. In many cases, this is due to a lack of formal education and understanding within schools and local clubs about the nature and impact of the condition.

In my own case, the frustration and anger at my case not being noticed sooner operated in concert with a general interest and desire to find out more dyspraxia and its symptoms.

Jake Borrett is an English Literature student at the University of Hertfordshire and the author of his own blog, where he recounts his own stories and experiences with dyspraxia and Crohn’s disease. In 2013, following criticism of the structure of his essay writing, he decided to find out once and for all if dyspraxia was at the heart of his issues over the last 18 years. His suspicions were soon confirmed by university staff.

For Jake – like in my own case – the news brought a mixture of concern and relief.

“The hardest thing to deal with after the diagnosis was coming to terms with the condition and how it can impact everyday life, including aspects of education, as well as in work and social life.

“Admittedly though, I was pleased to know what was causing me distress and difficulties such childhood.”

The findings of a study carried out with more than 1,000 teaching professionals by the Dyspraxia Foundation in 2008 revealed that only 29% had been offered formal training in recognising and supporting students with dyspraxia and just over a half (51%) revealing a general lack of awareness of the condition within their school.

These figures represent a major concern, with dyspraxia affecting around 6% of the population, and around 70% of children suffering from the condition will carry difficulties into adulthood that may greatly impair educational and emotional outcomes. The implications of this are still clear in my own case, where crucial tasks for my future career plans as a journalist, including driving and shorthand, are potentially hindered by the impact of dyspraxia.

According to the Dyspraxia Foundation, late diagnosis represents a key problem for girls suffering from dyspraxia, which is still widely considered as a predominantly ‘male’ condition (two boys to every girl are affected). This can have a damaging impact due to the potential social implications of having difficulties in motor-based tasks applying make-up or in choosing clothing.

Robert claims that dyspraxia “still very much remains in the dark” in terms of publicity compared to similar developmental disorders such as dyslexia and ADHD. He cites the lack of support and understanding, especially from teachers and employers, as being one of the toughest elements in learning to live and operate with dyspraxia.

Dr Rosalind Van de Weyer, head of Dyspraxia UK, is an occupational therapist and neurologist that works closely with adult dyspraxics and sufferers of other development disorders. She agrees that late diagnosis and lack of awareness still represent critical issues:

“Sadly it has been common to date for dyspraxics to go undiagnosed until later life. Many of the adults I see are very bright and have struggled through, getting grades B-F, when really they should have been getting A-C with the right support.

I don't like to get to personal on instagram but wanted to give #dyspraxia some awareness. Basically it is a coordination and motor skills 'disability' where i am slower than others and can seem a bit odd in more ways than others. This week marks #dyspraxiaawarenessweek and i just hope people become more familier in what it is and how it effects us who have it. #dyspraxic #awareness #happy #hidden #disability

“The wider public have very little knowledge about dyspraxia, or know what it is. Many misconceptions are that it’s another sort of dyslexia or ‘just a problem with balance’. In fact dyspraxia is a very complex condition with a common set of symptoms which presents differently in person to person.”

However, while the condition remains relatively under-reported, Jake claims that concrete steps have been made in recent years to rectify the awareness gap.

Jake said: “I do think that public awareness of dyspraxia has improved in recent years. It is true that dyslexia and ADHD generally seem to get more public attention, but over the recent years we have worked together to get lots of attention for dyspraxia as well.

“Dyspraxia is heard a lot more in the media, for instance in television programmes such as Embarrassing Bodies and Waterloo Road, to other platforms such as radio broadcasts. Five years ago there was little media coverage for dyspraxia and I like to think we as a community have gone a long way to help change that.”

With this spike in the publicity and understanding of dyspraxia more widely, comprehensive plans are now also being put in place by schools, universities and workplaces to better support those impacted by it.

In my own case, this meant receiving the use of a computer and extra time for exams and for Jake, Hertfordshire University provided him with not only the basic allowances given for my milder form of dyspraxia, but a full list of enhanced benefits, including special assignments and one-to-one invigilation for exams.

Without this additional support, he claims, he would not have gone to university.

Robert is also hopeful about more people having their dyspraxia picked up on and accommodated early in life, with the heightened understanding of learning and development disorders more generally within schools.

He said: “I’m confident that within schools now there will be at least one person with the knowledge to know and pick up on something being a bit different about this one child compared to the others and starting to look for signs of potential dyspraxia or learning difficulties.”

Looking into the future, it can be argued that dyspraxics discovering their condition today – whether earlier in childhood or later on in life – have a better set of conditions than ever before. The information available online and from blogs of committed personal sufferers such as Robert and Jake provide valuable insights that have helped me come to terms with the hidden, but important role played by dyspraxia in my own life.

For me personally, the next few years represent some of the most important in terms of starting the process of making my own way in the world. In tackling the twin worlds of work and adult life, my dyspraxia is sure to present more hurdles to overcome, but now I find myself armed with the knowledge of how to tackle these issues head-on.

My diagnosis may well have come later than for others, but by knowing about my condition and the limitations it brings, I can learn to live with and adapt my weaknesses to the situation around me. It was difficult to hear after so many years that you were wired differently from others, but now I’ve been given the clarity to understand myself and why I do some of the things that I’ve always done. That heightened awareness of myself is worth any wait.