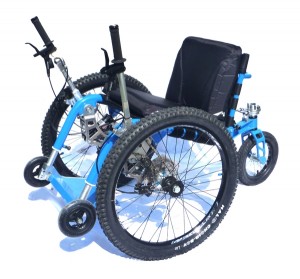 Entrepreneur Tim Morgan, responsible for an all-terrain wheelchair business, has been awarded a Silver Medal.

The Royal Academy of Engineering celebrates the strength and diversity of UK engineering with the presentation of its coveted Silver Medal to four outstanding British engineers and Tim Morgan from Mountain Trike is one of these winners. Winners must have achieved significant commercial success in their fields and be recognised for advancing the cause of engineering in this country; a cause that is especially important to the Academy with the recent launch of its Enterprise Hub and Engineering for Growth campaign.

Tim Morgan’s exceptional achievements are detailed below. Their medals will be presented at the Academy’s annual awards dinner at London’s Battersea Power Station on 17 July.

For the final project of Tim’s Masters in Innovation and Engineering Design from the University of Bath, which he completed in 2007, he identified the need for an all-terrain wheelchair that would allow users, to reach places previously inaccessible to wheelchairs. Securing financial backing and developing the project in his spare time while working as a Design Engineer at Bentley Motor Cars, Tim founded Mountain Trike Co in 2008.

Tim led the design, engineering and product development, manufacturing and commercialisation of the Mountain Trike All Terrain Manual Wheelchair, which is built in Nantwich, Cheshire in the UK. It has a patented innovative drive as well as inventive steering, braking and chassis systems and has won a number of accolades, including ‘best new product’ awards at mobility shows. Selling directly to customers, the wheelchair quickly attracted a following with the first deliveries beginning in August 2011. The company is cash positive and making a profit on a monthly basis with international sales accounting for nearly 40% of its overall turnover.

Despite a diagnosis of MND, David has re-found his freedom and isn’t giving up as he pushes himself to limit in Peak climbs

Three finalists named for the 2012 Stelios Award for Disabled Entrepreneurs

Bathrooms for the less able