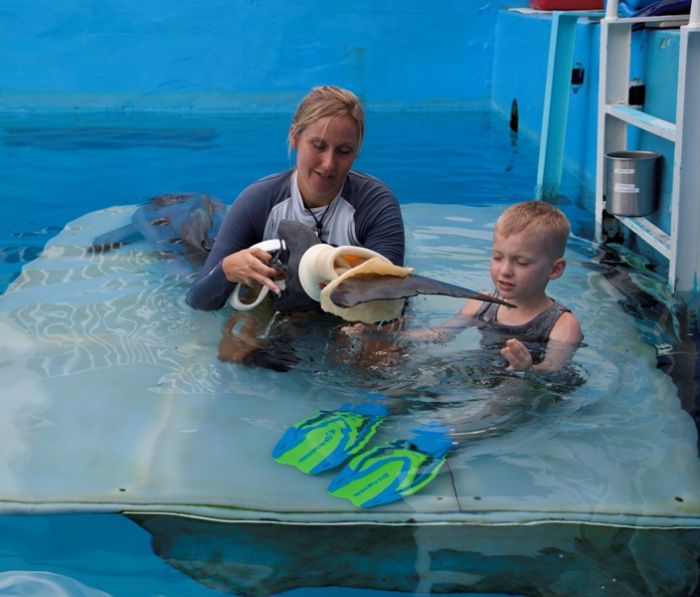 Eight year-old double amputee Cieran Kelso, from Northwich in Cheshire, has this month realised his dream of swimming with his hero; a tail-less dolphin named Winter whose story was the inspiration behind hit movie Dolphin Tale.

Having contracted meningitis aged just one, Cieran underwent a lifesaving operation in which both of his legs were amputated below the knee. Whilst Cieran became accustomed to using his prosthetic limbs and wheelchair to help him get around, he had always longed to be able to swim like his friends.

After seeing Winter in Dolphin Tale, Cieran became even more determined to learn to swim. The film explains how the bottlenose dolphin lost her tail after it became entangled in rope attached to a crab trap. After being rescued off the coast of Florida, Winter was taken to Clearwater Marine Aquarium where she was fitted with a prosthetic tail which enables her to return to her natural swimming motion.

However, Cieran’s dream seemed unattainable until recently, when, after months of fundraising by his father, Gary, and stepmother, Gemma, Cieran was finally fitted with custom-made limbs and flippers by the London Prosthetic Centre. Light-weight and flexible, the prostheses are designed to enable the wearer to tread water and swim laps with ease.

With the remaining funds, Cieran’s family arranged a once in a lifetime trip to the Clearwater Marine Aquarium in Florida so that Cieran could finally realise his long-held dream of meeting Winter.

“Cieran’s first words when he saw the film were ‘Winter’s disabled just like me’. It was so overwhelming watching him swim with the dolphin; he had dreamed of it for so long. Cieran said that she was his friend, that he identified with her. You could see from the way they were in the water together that there is a massive bond.”

“Cieran loves swimming and has been having swimming lessons for just over a year, but he couldn’t propel himself through the water or stay afloat as easily as everyone else. As soon as Cieran first wore the flippers it was incredible the speed with which he could travel through the water, his instructor even had to swim with him to keep up!

“Since we got back from Florida, Cieran is calmer and more content in himself. His dream job is now to go back and look after Winter – he no longer wants to be a train driver!”

Cieran is only the second visitor to have swum with Winter and spent over an hour in the pool with the dolphin and her trainer, Cammie Zodrow, before being joined by his five year old sister, Layla-Eve.

“At the London Prosthetic Centre we specialise in designing custom-made prosthesis for an extensive range of sporting activities such as sprinting, horseriding, skiing, sailing and rowing. With our years of experience in the industry, we felt we were perfectly positioned to help Cieran and it’s fantastic to see what a difference the flippers have made to his life.”