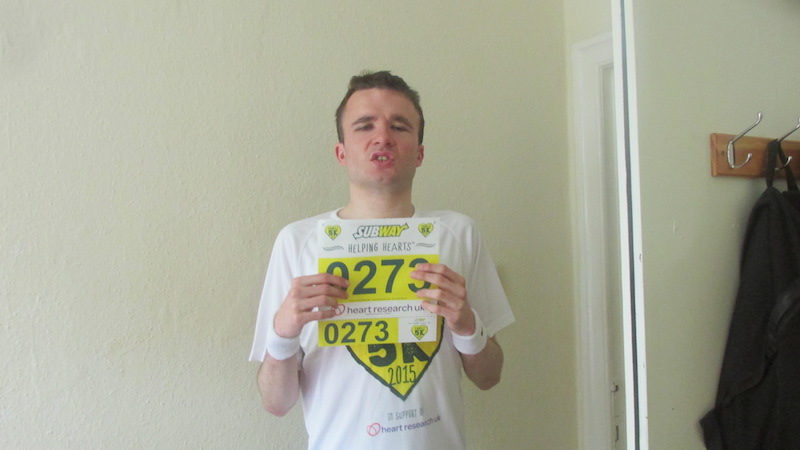 A 22 year old from Edinburgh, who has autism, is taking on his biggest ever challenge this Sunday  when he runs a half marathon at the famous Silverstone Grand Prix race track. His journey to completing the race is being featured in a new video podcast series.

Jamie Knox is supported by the national social care charity Community Integrated Care at Howden Hall, a specialist service for two young men with autism. The charity supports Jamie to lead a full and independent life in the community.

Jamie joined Howden Hall two years ago. His team recognised that he had lots of energy and was happiest when active, but his challenges with social situations meant that he would not enjoy team sports. Instead, they helped Jamie access his local gym, a space where he could set himself personal goals and focus on himself without worrying about others.

With their support he thrived in this setting, discovering a passion for running. Over the course of the year he built up his fitness and signed up to take on the 2015 Edinburgh Subway Helping Hearts 5km Race. Completing this was a significant achievement for Jamie, with him participating in a busy event with thousands of other people. This success was enabled by the focused support of his team, who used reassurance techniques and provided lots of guidance to help him prepare.

Having competed the 5k race, Jamie wanted to take on a much bigger challenge. His team supported him to sign up for the 2016 Adidas Silverstone Half Marathon, which takes place on 13 March. His dedicated team will be taking part in the half-marathon with Jamie, giving him support and encouragement throughout each of the 26,000 steps of the race.  This event is one of the highlights of the UK running calendar and Jamie will be taking part along with 8000 other runners.

Jamie’s Support Worker, Mike Thomson, says: “Jamie knows that this is the challenge of a lifetime, so he’s counting down the days and pushing himself to the limit. He’s achieved incredible things since taking up running, and the sport has given him a new confidence and passion in life. We are honoured to be running alongside him, helping him to succeed with this great ambition. I can’t wait to see him proudly wear the medal around his neck at this famous racetrack”

The video podcast series, ‘Jamie’s Journey’, can be watched at: www.youtube.com/c/CommunityIntegratedCareTV

Find out more about Community Integrated Care at www.c-i-c.co.uk

Charity Spotlight: How we can work to “see the child, not the disability” with Caudwell Children