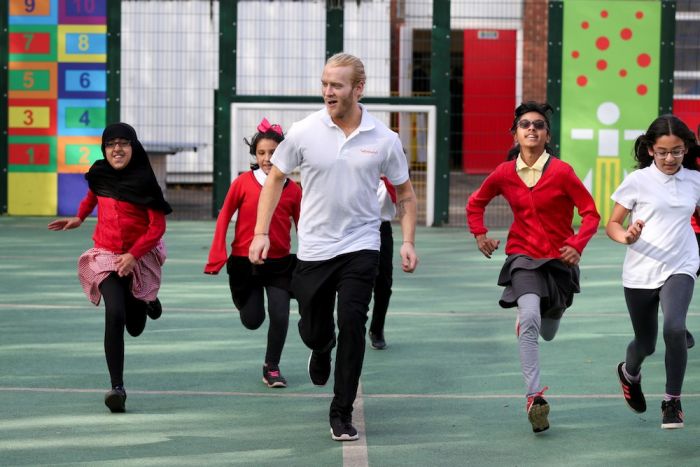 Students at Phillimore Community Primary School, Sheffield were treated to a surprise appearance from Jonnie during their morning assembly to officially open the new playground. The sports star also led a PE lesson where he put the pupils and the teachers through their paces with some Paralympic challenges, encouraging them to think differently about how to keep active.

Phillimore Community Primary School in Sheffield won the £50,000 playground makeover following their participation in the Sainsbury’s Active Kids Paralympic Challenge, which saw the pupils design the multi-purpose playground from scratch.  The Sainsbury’s Active Kids Paralympic Challenge is an inclusive programme that encourages all young people to take part in sport.

Jonnie Peacock, Sainsbury’s Active Kids ambassador, said: “It was brilliant to surprise the children at Phillimore Community Primary School and officially open their new fully accessible playground. The design the pupils came up with for the playground is fantastic – in fact I couldn’t wait to have a go on it myself!

“I love being part of the Sainsbury’s Active Kids Paralympic Challenge to help raise awareness of inclusive sport as well as motivate students and staff to get active!”

Lisa McHendry, assistant director at the Youth Sport Trust, said: “We are proud to be part of this partnership with Sainsbury’s and the British Paralympic Association. It has given all young people a chance to try sports like Boccia, goalball and sitting volleyball.

“We believe in creating a brighter future for all young people through sport and it’s important to create inclusive opportunities and increase the awareness and understanding of Paralympic sport amongst young people. It’s fantastic to see the success of these Challenges in encouraging children to be more active.”

Gillian Briggs, Head Teacher at Phillimore Community Primary School, added: “We were over the moon when Jonnie came to the school to open our new playground. The pupils were already so excited to have won the competition with Sainsbury’s Active Kids, so to have the added surprise of a Paralympic athlete was just fantastic. The pupils design was amazing, they worked really hard at it, so we were all thrilled to have won the makeover.

“We’re really grateful to Sainsbury’s for all of their support. The Active Kids Paralympic Challenge has already helped us teach hundreds of children about inclusive sport and inspired them to lead active lives themselves.”

Find out more about Sainsbury’s Active Kids at activekids.sainsburys.co.uk