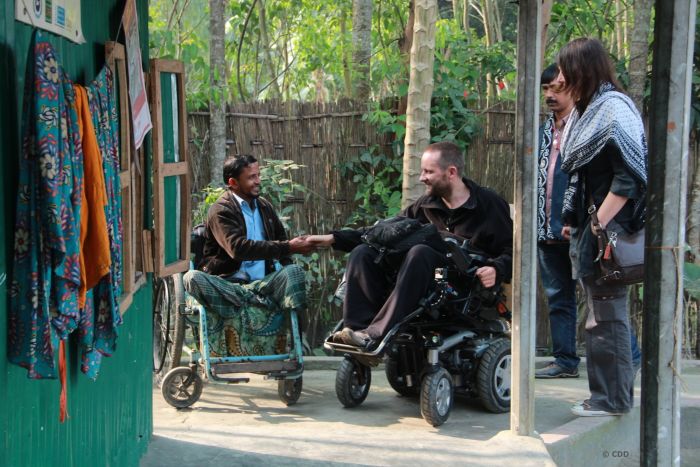 Disaster situations have been dominating the media, with hurricanes and earthquakes devastating thousand of lives. For aid workers supporting people on the ground, how do you facilitate for disabled people? We spoke with Gordon Rattray of CBM, the overseas disability charity, about their new app, Humanitarian Hands-on Tool, which offers support for aid workers in disaster areas worldwide at the touch of a button

How did the idea for The Humanitarian Hands-on Tool (HHot) come about?

In the last few years, there have been some international frameworks created at UN and government level, which basically oblige governments and humanitarian agencies to ensure that their work is inclusive of everybody.

It is well proven that people with disabilities are among the most affected in any disaster. We want to give people the tools to ensure the work they have been doing is inclusive. To give you a very concrete example: you might have an aid worker who is working in disaster situations for 20 years and knows exactly how to build a water sanitation facility but they’ve been doing it in a way for 20 years that is not physically accessible for people in wheelchairs. Or in a way that doesn’t have signage that suits people who are blind.

Fieldworkers need to know how to do exactly the same job but to do it in a slightly different way that makes it more inclusive and accessible. That is what HHot does.

How can aid workers use the app?

The tool is an application that can be downloaded from app stores (the App Store or Google Play) and once workers have it on their smartphone or their tablet, they don’t need Internet access because all the resources are there to be used. What it does is take a big task such as building a toilet facility and breaks it down into small tasks.

Once the user has identified the type of information they need for their job, they can save the cards suitable to them. They can the share the cards with their colleagues and once they’re back online the app automatically updates if there is any new information added and they have the options to provide feedback.

What has been the feedback?

We launched the app on World Humanitarian Day (19 August) and during the development process we did some initial testing with people we know in the field of humanitarian work. In general feedback was very positive. Everybody said the app was extremely user-friendly.

The phase two development of the app, which we are in the process of applying funding for, looks to do some very structured detailed testing with a large humanitarian organisation in a real field situation, post-emergency. We expect within the next year to 18 months to have some very well-structured and defined feedback from a real life-testing situation.

In fact, the app has been designed to be fully-accessible to follow WCAG accessibility guidelines to level double A. It is useable not just by family members of disabled people but also by disabled people. Someone who is blind, deaf or with physical disabilities can use the app in the same way as anybody else can.

What are your future hopes for the app?

We need to find ways of disseminating the app so that people who are in emergency-prone situations have it in advance and then when they have no Wi-Fi they can go in to the app and pick the resources that are of use to them.

The aim is simply that the app becomes the go-to tool for inclusive emergency response. We’re really trying to make sure the app isn’t seen just as an extra to include people with a disability. Phase two will also look at producing it in at least one other language and then going further more languages in the future. Obviously, the first one is English and we’re looking at French, Arabic, Spanish, the main global languages – or the languages where most disaster-prone countries.

When we look at the feedback that will also guide our development. At the moment, we’re going in a good path and it probably needs to be refined a little bit but generally to go the way we’re going to embrace technology.

Find out how you can support CBM by visiting their website here.

International Women’s Day – a voice from the Philippines

Hear my voice: speaking out for International Day for People with Disabilities