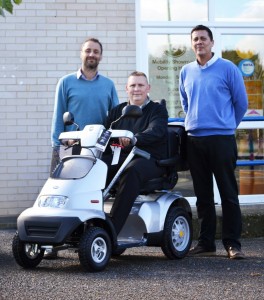 Andy McIntosh, 42 from Strathaven near Glasgow, is a retired Army Corporal who despite living with severe mobility difficulties, will be driving a TGA Breeze mobility scooter 100-miles to raise military charity donations on the 100th World War One anniversary.   Andy will be driving a Breeze S4 GT loaned by TGA, the UK’s leading mobility scooter specialist. It is the same model that won the BBC Top Gear Extreme Mobility Scooter challenge, which was broadcast on BBC2 in 2012. More recently, this robust 8mph scooter with off-road capabilities, set a new world record this summer for: ‘The greatest distance covered in 24 hours by a mobility scooter.’ The Breeze delivered 100% reliability and comfort to the driver during this extreme challenge and will once again be tested to the limit on this 100-mile journey along the Scottish east coast.

Andy served in The Cheshire Regiment for 14 years experiencing front line action in Bosnia, Iraq and Northern Ireland. Originally from Manchester, Andy retired from the Army fully fit to pursue a new career, however in 2008 he received devastating news. He was rushed to hospital after collapsing at work and following his stablisation, doctors discovered he had a very rare vascular condition that was increasingly affecting his circulation. With over 150 clots found in his groin area, scans revealed his major veins had disintegrated so blood flow back to his heart was being severely restricted. As his condition and mobility worsened he asked to be referred to the UK’s leading vascular surgeon, who, following years of tests, concluded that there was a potential solution. On the eve of Andy’s 20-hour operation that could help him walk again, final tests revealed that this procedure would not be possible and could potentially be fatal.

Andy is now rebuilding his life in the knowledge that his condition will continually deteriorate and so to remain positive, has decided to ‘give something back’ by attempting this 100-mile fundraiser.   Andy said: “There have been a lot of tears since receiving the news that I can’t be operated on, but I am a man that never gives up.  I’ve been in some very dark places but I won’t let this beat me.  While talking with my partner, I decided that I needed something to keep me focused and give me some self worth. Before I tackle John O’Groats to Land’s End next year on a mobility scooter in the shortest time ever, I have organised this 100-mile, 48-hour warm-up event to raise funds for Poppy Scotland, SSAFA and ABF The Soldier’s Charity. These charities have done so much for my family and I so it is time to give something back. Despite my walking difficulties and health issues, I am determined to raise over £2,000 to help fellow disabled servicemen and women. I’m chuffed that TGA has kindly agreed to loan me a Breeze scooter that is renowned for durability, reliability and outstanding battery range. Klyde Mobility is also supporting me with mechanical training and back up as I will be attempting this challenge solo. A tall order, but I will succeed.”

Andy continued: “Why 100 miles? This is to coincide with the 100th anniversary of the First World War.  I plan to start this challenge on the 9th November in Widdrington and finish at the Poppy Scotland offices, Edinburgh, on 11am on the 11th November – Armistice Day. I would encourage everyone to please donate to my Just Giving page, it will really make a difference to the lives of injured veterans and their families.”

Daniel Stone, TGA Managing Director concluded: “The TGA team and I are fully behind Andy and are delighted to be assisting with fundraising for Poppy Scotland, SSAFA and ABF. Our Breeze scooter is a tried and tested design that will deliver all the performance, comfort and reliability Andy needs during his challenge. This highly popular model delivers independence with peace of mind to many individuals across the UK who without ownership, would be housebound or unable to engage with society. We will continue to work closely with Andy as he finalises his plans for this 100-mile challenge and the 2015 world record attempt.”

TGA Electric Leisure Limited TGA is based in Sudbury, Suffolk and has been a respected designer, manufacturer and provider of mobility products for almost 30 years with a specialty in scooters. Find out more at www.tgamobility.co.uk

A wheel-y big deal for Tracey

How dynamic movement orthoses are helping to change lives